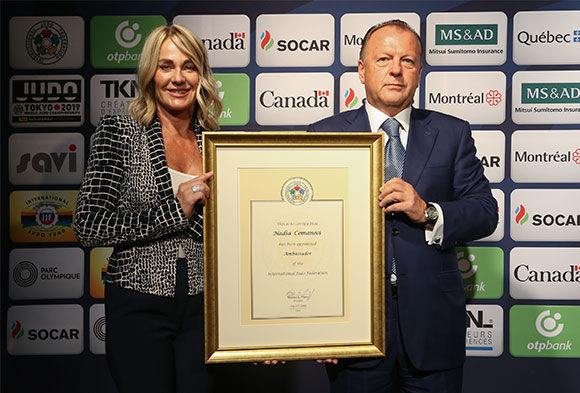 Romania's Nadia Comăneci, the first gymnast to complete a perfect 10 routine at the 1976 Olympic Games in Montreal, has returned to the Canadian city to receive a diploma marking her role as an ambassador for the International Judo Federation (IJF).

She received the certificate from the world governing body's President Marius Vizer during a special ceremony at the Maurice Richard Arena, where the IJF Grand Prix is currently taking place.

Both Comăneci and Vizer are originally from Romania.

Comăneci now lives in the United States and Vizer is an Austrian citizen.

"It is a great honor to be nominated IJF ambassador," said Comăneci.

"I like everything that happens within the sport, the atmosphere.

"Everything Marius Vizer does for the athletes.

"Even though I didn’t practice judo it’s good to have around other athletes supporting the judokas."

Comăneci claimed she saw similarities in judo and gymnastics.

"It takes time and patience, perseverance but also you have to love what you are doing.

"You don’t have to be born in a particular place to be the best.

"It needs hard work, but if it’s in your heart and you like the challenges it will work."

Having become the first gymnast to earn a perfect score of 10.0 at the 1976 Olympic Games, Comăneci received six more in Montreal as she won three gold medals aged 14.

She won a total of five medals at those Games - three gold, a silver and a bronze.

Beautiful memories...43 years ago.... #Montreal1976 great to be back❤️ pic.twitter.com/6jXozuSK0b

"I excelled here, and I lived here," Comăneci said.

"I can’t talk about my life without talking about Montréal.

"I returned a couple of times for the World Championships and to see myself in the lobby on posters from the 1976 Olympics and the Park they named after me brings back many emotions.

"It’s nice to have the time to enjoy it, to be here and also to celebrate history for judo with this inaugural Grand Prix.

"Hopefully my history here in Montréal will motivate other athletes to be the best they can be."