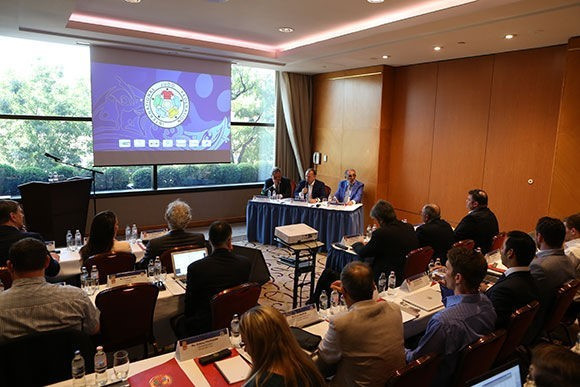 A marketing and media seminar has been held by the International Judo Federation (IJF) to discuss the future of the sport.

Among those who took part in the event, led by IJF President Marius Vizer, were former Romanian gymnast Nadia Comăneci, a five-time Olympic gold medallist, and René Jaggi, the IJF strategy and marketing director and former President and chief executive of Adidas.

They were joined by former tennis player Ion Țiriac, winner of the French Open doubles in 1970 and former President of the Romanian Olympic and Sports Committee.

"I am not a judo person and I discovered it late but I fell in love with your sport," said Tiriac.

"It is a great activity and a fantastic educational tool.

"Under the leadership of Marius Vizer and his team, you have all the capacities to make judo big on TV but also in the society.

"The society needs the values you are promoting."

"I also discovered judo quite late and every time I come to a judo event," she said.

"I have the feeling that I am in my family."

The event, was held on the eve of the IJF Budapest Grand Prix, which is due to take place tomorrow and Sunday (June 24 and 25).

"This seminar is very important for our organisation and for judo," said Vizer.

"We are talking about the future of our sport.

"Thank you to our guests for their outstanding support.

"A lot of work has been done over the past years and our sport has already changed a lot.

"We are keeping working on making judo more attractive and more popular without abandoning our values, which make judo different from any other activity."

Jaggi warned, though, that the sport would need to adapt to changing times.

"Judo has to open to new public and we must not be afraid of changes," he told the audience.

"There are changes to be made that won’t affect the values of judo but will make it ready to enter a new era. Judo has the chance to have a great leader with a vision and passionate people working for the development of the sport throughout the planet.