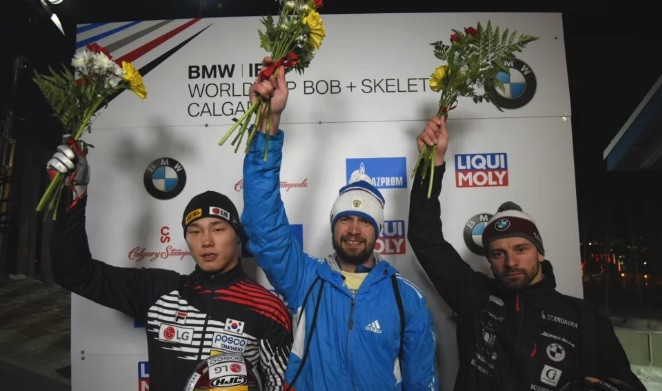 Alexander Tretiakov of Russia extended his lead in the race for the overall men's skeleton title as he won the penultimate race of the season in Calgary.

Tretiakov triumphed in the first of two skeleton events due to be held in Calgary this weekend, rescheduled after it was cancelled in Königssee in Germany last month, in a combined time of 1min 51.35sec.

The Russian, initially stripped of the gold medal he won at Sochi 2014 and disqualified before his sanction was overturned, finished 0.13sec quicker than Olympic champion Yun Sung-Bin of South Korea.

World champion Martin Dukurs of Latvia came through to take third, a further 0.03 slower than Tretiakov.

The Russian now has a total of 1,494 points and will clinch the overall title if he finishes fourth or higher in the last event of the campaign on Sunday (February 24).

Yun is still in contention on 1,455 points but will need Tretiakov to slip up if he is to defend the crystal globe.

In the women's event, Tretiakov's team-mate Elena Nikitina also strengthened her lead going into the final competition of the season but could only manage fourth place today.

The Russian, who was also banned for doping at Sochi 2014 before the punishment was overturned on appeal, has a commanding lead at the top of the standings.

Nikitina has 1,479 points, 107 points in front of Germany's Tina Hermann, who was second in today's event.

Mirela Rahneva delivered victory for the host nation in a combined 1:54.52, 0.46 ahead of Hermann.

Defending overall champion Jacqueline Lölling will not compete this weekend as she has returned to Germany for family reasons.

The last women's skeleton event is due to be held tomorrow.