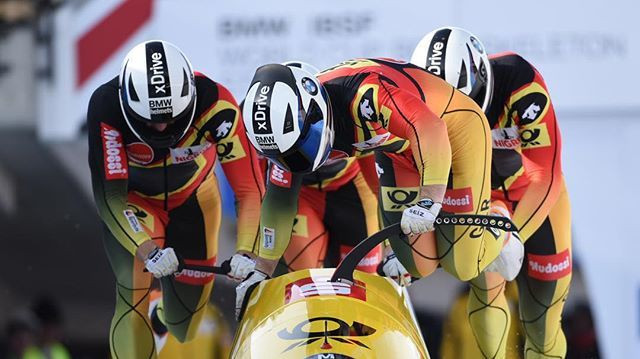 Germany's Francesco Friedrich continued his remarkable form so far this season as he won today's four-man event to secure a second victory at the International Bobsleigh and Skeleton Federation World Cup in St Moritz.

The double Olympic champion spearheaded his team, featuring Candy Bauer, Martin Grothkopp and Alexander Schüller, to the two and four-man double in a combined time of 2min 10.48sec.

The quartet finished 0.51sec quicker than nearest challenger, European champion Johannes Lochner, whose German team were forced to settle for the silver medal.

Oskars Kibermanis, Matiss Miknis, Helvijs Lusis and Janis Strenga of Latvia claimed bronze after moving from eighth to third thanks to clocking 1:05.19 in their second run.

Victory for Friedrich, who yesterday continued his unbeaten run in the two-man event which stretches back over a year, saw him cement his status as the dominant athlete on this year's IBSF World Cup circuit.

He has also extended his lead at the summit of the four-man standings as he now has a total of 1,310 points, with Lochner trailing in second on 1,237.

Kibermanis remains in contention following his third place result as he sits on 1,234 going into the two-week break in the World Cup season.

The next event of the campaign is scheduled to be held in Lake Placid on February 15 and 16, with the Junior World Championships taking place in Königssee in Germany from Saturday (February 2) to Sunday (February 3).