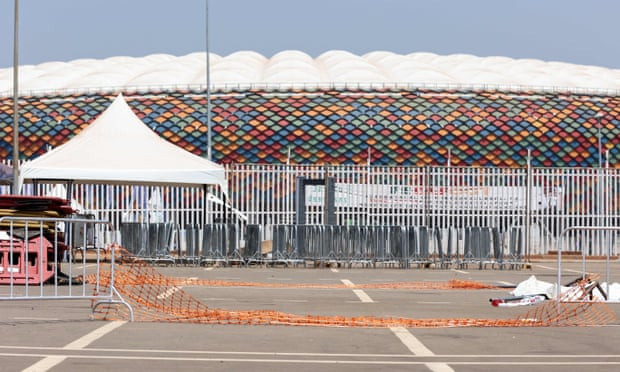 The Africa Cup of Nations quarter-final between Egypt and Morocco on Sunday (January 30) has been relocated to the Ahmadou Ahidjo Stadium in Yaoundé following the deadly crush at Olembé Stadium which killed eight people.

An additional 38 people were reportedly injured during the match between hosts Cameroon and Comoros last Monday (January 24).

The Confederation of African Football (CAF) have now taken the decision that the Stadium will not stage any more matches during the tournament.

"The next match that was scheduled for the Olembé Stadium will not take place until CAF and the Local Organising Committee have received the full report of the Investigation Committee (into the Olembé incident) indicating the circumstances and events that led to the injury and death of spectators at the Olembé Stadium," the body said in a statement.

CAF have demanded that they receive the report into the tragic incident by tomorrow.

The CAF Africa Cup of Nations Organising Committee has also decided to move the quarter-final fixture between Senegal and Equatorial Guinea on Sunday to the Ahmadou Ahidjo Stadium.

It was originally scheduled to take place in Japoma Stadium but the state of the surface in Douala has been criticised throughout the tournament which is thought to be the reason for the change, although CAF has not confirmed the cause.

The venue is still set to stage Gambia's match with Cameroon on Saturday (January 29), however.

The third and final change comes for the first semi-final, scheduled for next Wednesday (February 2) which has also been moved from the Japoma Stadium to the Ahmadou Ahidjo Stadium.

It will feature the winners of Burkina Faso versus Tunisia and Senegal versus Equatorial Guinea.

CAF President Patrice Motsepe has demanded an immediate inquest into the crush at Olembé Stadium.

"We have to make sure the safety of every single spectator is our primary concern," he said.

"There is zero tolerance on circumstances which could result in people being injured at the stadium or losing their lives.

"We have to take emergency and urgent steps now, so I have called a meeting tomorrow and I've also sought the guidance and advice of my vice-presidents.

"I need a report on what happened, the circumstances that led to people being injured and emergency measures to make sure that doesn't happen again.

"We have to take collective responsibility.

"There must be a committee set up to immediately investigate what happened and find out who did not perform their responsibilities.

"We want that report by Friday."