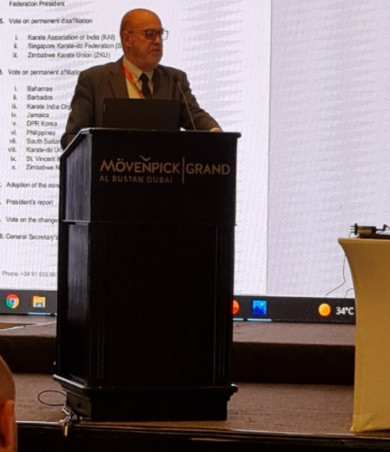 Espinós said the WKF is not giving up on its bid to secure a place at Paris 2024, despite the fact the programme for the Games has already been confirmed by organisers and the IOC.

It forms part of the WKF's attempt to become a core Olympic sport and gain a permanent place at the Games in future, which the Spanish official admitted is an ambitious target.

The WKF commissioned Nielsen Sports to carry out an independent review of karate's popularity in France and the United States during its Olympic debut at Tokyo 2020 compared with the three other additional sports at the Games in the Japanese capital that have been included at Paris 2024 - surfing, skateboarding and sport climbing.

According to the data, which featured statistics on broadcast figures, fan potential and media coverage, karate had the highest audience for a single broadcast out of the four sports at Tokyo 2020 as nearly four million people in France watched Steven Da Costa win the gold medal in the 67 kilograms kumite category.

Karate's average audience per broadcast was second only to sport climbing, while Nielsen Sports also found karate had the largest number of "core fans" - those defined as being extremely interested in the sport - of the four disciplines in the next Summer Olympic host country.

Espinós told delegates at the WKF Congress here today that the statistics have been included in the letter to Bach, which forms part of the governing body's campaign to become a core Olympic sport.

"This is a very difficult target, but as we are going to do and as we are always doing, we will continue fighting and working," he said.

"We will not give up as long as I am the President of the WKF.

"I hope it will be possible that this information, which reflects the injustice of exclusion from Paris 2024, will show the support karate has.

"The Paris 2024 setback has taught us that nothing is easy.

"We demonstrated in Tokyo why we should be a permanent Olympic sport, not just an additional one."

Federations governing sports on the Tokyo 2020 programme are expected to receive a report from the IOC on their sport's performance at Tokyo 2020 within the next two weeks.

The WKF is not entitled to a share of the revenue generated by the Games as it was an additional sport.