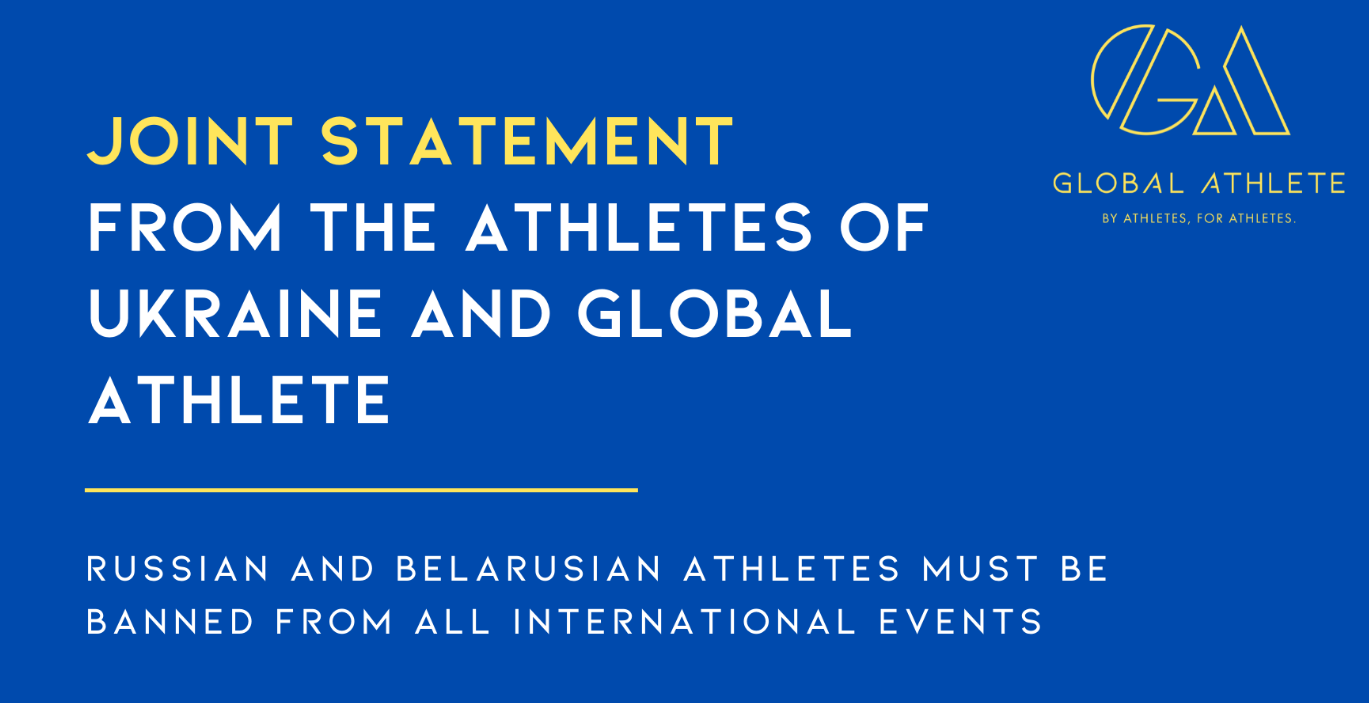 "Athletes of Ukraine" and Global Athlete have insisted in a joint statement that the international ban on competitors from Russia and Belarus should remain.

On February 28, in the wake of Russia's invasion of Ukraine, the International Olympic Committee's (IOC) Executive Board advised that athletes and officials from Russia and Belarus should be banned from all international sporting events.

The IOC said that normally it would not punish athletes for the decisions of a Government if they are not actively participating in them, but the war in Ukraine is an exceptional circumstance and the body has made the decision in order to "protect the integrity of global sports competitions and for the safety of all participants."

But last week, United States Olympic and Paralympic Committee chair Susanne Lyons said that the IOC was discussing with National Olympic Committees "whether there is a pathway" for the return of Russian athletes to international sport.

In response, the IOC told insidethegames in a statement that its guidelines for International Federations to bar Russian and Belarusian athletes from events "remain in place for the time being", but that it wants to "emphasise the role of sport as a unifying factor in today's much-divided world."

Earlier today, Bild reported that the International Ski and Snowboard Federation (FIS) Council is to discuss the participation of Russian and Belarus athletes next month, with secretary general Michel Vion having suggested they could return to FIS competitions in December.

"It could be quick," the FIS secretary general added.

"Maybe it's possible in December, then both nations - of course without a national flag and anthem - could possibly also take part in the World Championships."

Now Global Athlete, the group which seeks to represent the views of athletes around the world, has issued a statement maintaining that the ban remains in place until Russia "fully withdraws from Ukraine".

It has done so in collaboration with "hundreds of Ukrainian athletes", Global Athlete director Rob Koehler told insidethegames.

The statement reads: "As the IOC uses their Olympic pawns to test the waters on bringing back Russia and Belarus into the Olympic Movement, athletes from around the globe remain steadfast in their calls for Russia and Belarus to be banned from international sport events.

"Over the past eight years Russian and Belarusian authorities have torn families apart and brutally taken the lives of thousands of innocent Ukrainian citizens.

"While we recognise that the International Olympic Committee (IOC) cannot stop the violence, we do know that as leaders of sport the IOC stands in a powerful position to prevent Russia from continuing to use athletes as a tool for foreign policy.

"This has been a consistent tactic of Russian authorities and will almost certainly prevail if given the opportunity to utilise athletes once more.

"In using the Olympic Games to advance its geopolitical agenda in the lead-up to the invasion of Ukraine, Russia made sport a theatre of this war.

"Russia used the 2022 Beijing Olympics, on the eve of the invasion, to strengthen its relationship with China.

"In 2014, Russia similarly used a home Olympics in Sochi and a state sponsored doping program to bolster its international standing before annexing Crimea.

"Russia has also used its athletes, both before and during the war, in state propaganda and has elevated athletes to high-ranking positions in the armed forces.

"Russia has proven time and time again that athletes are an integral part of its foreign policy.

"If Russian athletes are allowed to return to international competition, the Russian state will again use the athletes to bolster the war effort and distract from the atrocities in Ukraine.

"Additionally, with the IOC announcing last week the adoption of the Strategic Framework on Human Rights, they cannot negate the reality that the brutal, unprovoked invasion by Russia and Belarus on a peaceful Ukrainian nation is a clear breach of Human Rights and a violation of the Olympic Charter.

"We recognise the acute affect that banning Russian and Belarusian athletes will have on their lives and pursuit of performance on the world stage.

"Athletes are not the powerbrokers who are responsible for this war.

"This is a hard stance with real human cost.

"However, the decision to ban Russian and Belarusian athletes far outweigh the reasons for terminating a ban.

"It is a difficult but an important task to maintain the suspension of both Russian and Belarusian athletes and their sporting officials from all international sporting events until Russia fully withdraws from Ukraine.

"The IOC holds significant responsibility to ensure that international sport is not a stage for Russian foreign policy and must enact on this clear breach of Human Rights and the Olympic Charter."