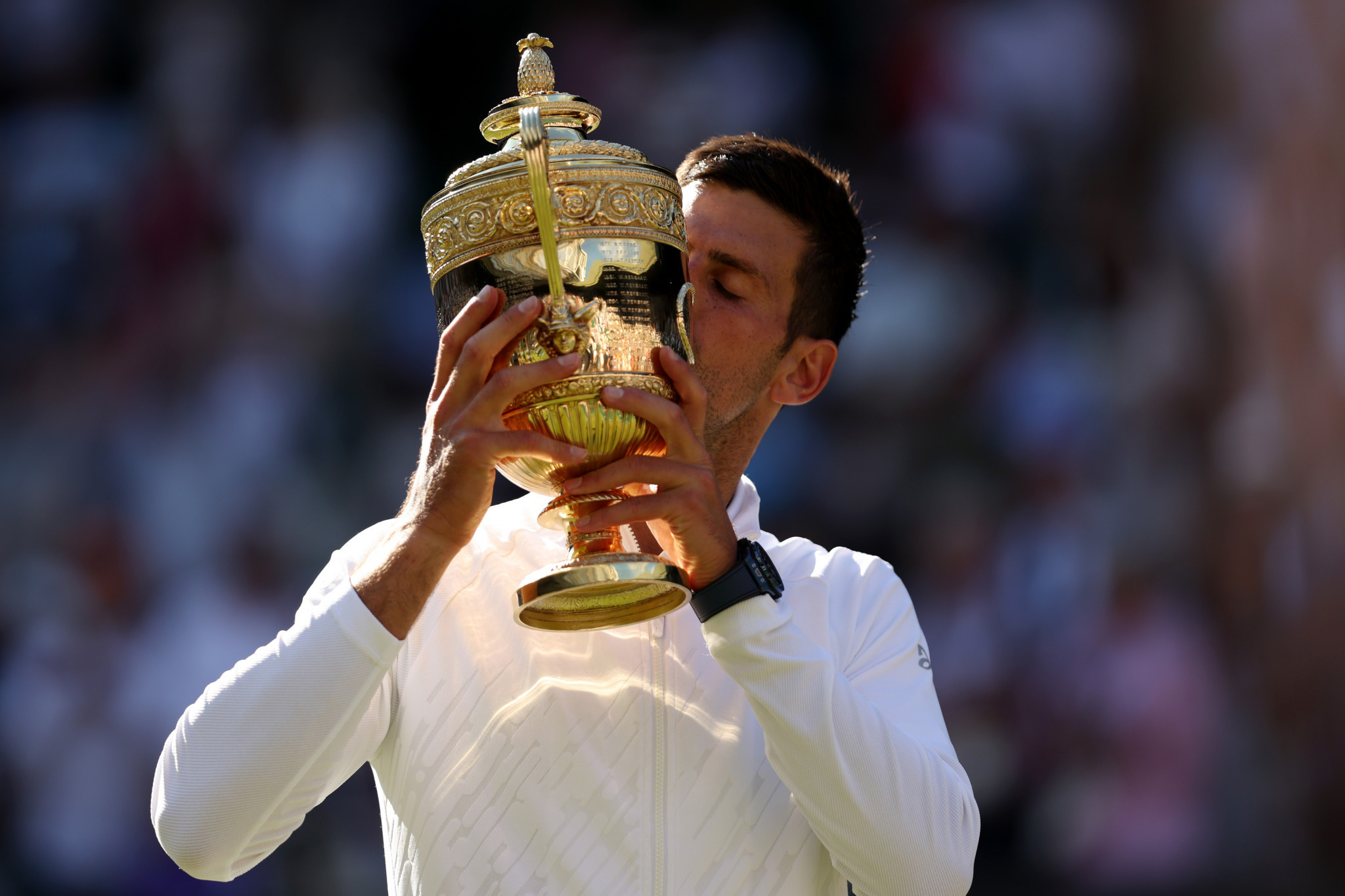 Serbia’s Novak Djokovic defeated Australia's Nick Kyrgios at Wimbledon to win his 21st Grand Slam, putting him one behind record-holder Rafael Nadal of Spain, in a match briefly interrupted by a Peng Shuai protester.

Djokovic's triumph is his fourth consecutive at the All England Lawn Tennis Club and his seventh overall.

Only Roger Federer of Switzerland has more in the men's singles.

However, in typical Djokovic fashion, the match was flipped on its head as the quality of the Serb began to shine.

Kyrgios' usual fiery emotions matched the heat on the day, though it did not change the picture on this occasion.

The Australian made mistakes, which Djokovic capitalised on, and eventually it was too late once a substantial tiebreak lead was created by the 35-year-old.

Djokovic claimed the title with the third of five championship points he had in store.

The final was briefly interrupted by a Peng Shuai protester in the 15,000-strong crowd.

Identified as Drew Pavlou, he held a sign and shouted "Where is Peng Shuai?" in reference to the Chinese tennis player that disappeared from the public eye after accusing Zhang Gaoli, former vice premier of China and high-ranking member of the ruling Chinese Communist Party, of sexual assault in November 2021.

The former Wimbledon champion's Weibo post, which was deleted within 20 minutes, said the incident had happened a decade ago.

The former Chinese tennis player reportedly retracted her allegations against Zhang and she repeated this during the Beijing 2022 Winter Olympics.

She was seen alongside International Olympic Committee President Thomas Bach at the Games.

The Women's Tennis Association has kept to its position of refusing to hold events in China and has constantly called for a "full, fair and transparent investigation" into Peng's allegations.

Earlier in the competition, four Free Tibet campaigners, who were wearing "Where is Peng Shuai?" tee-shirts, alleged they were confronted by Wimbledon security staff.

It is claimed they were warned of political messaging and approaching other spectators at the end, insisting Wimbledon must remain politically "neutral."

Pavlou published a statement on social media platform Twitter, alleging he was harshly treated by security.

He said: "Security pushed me over one of the rows and we all tripped over it.

"Then one of the security guards who tripped, a guy in a blue Hawaiian shirt, he wanted to get back at me and hurt me, he pushed me with full force down the steps and I fell head first.

"He then grabbed me and smashed me up against the wall and twisted my arms behind my back.

"As he smashed me against the wall he said, 'the police are coming to arrest you now.'

"Team of security treated me like a terrorist, kept my arms twisted really painfully behind my back as they expelled me from the stadium, all while saying they were sympathetic to my cause."

In the women's doubles final, Czech pairing Kateřina Siniaková and Barbora Krejčíková got the better of China's Zhang Shuai and Belgium's Elise Mertens.

The duo won 6-2, 6-4 to win their second Wimbledon title as a partnership.