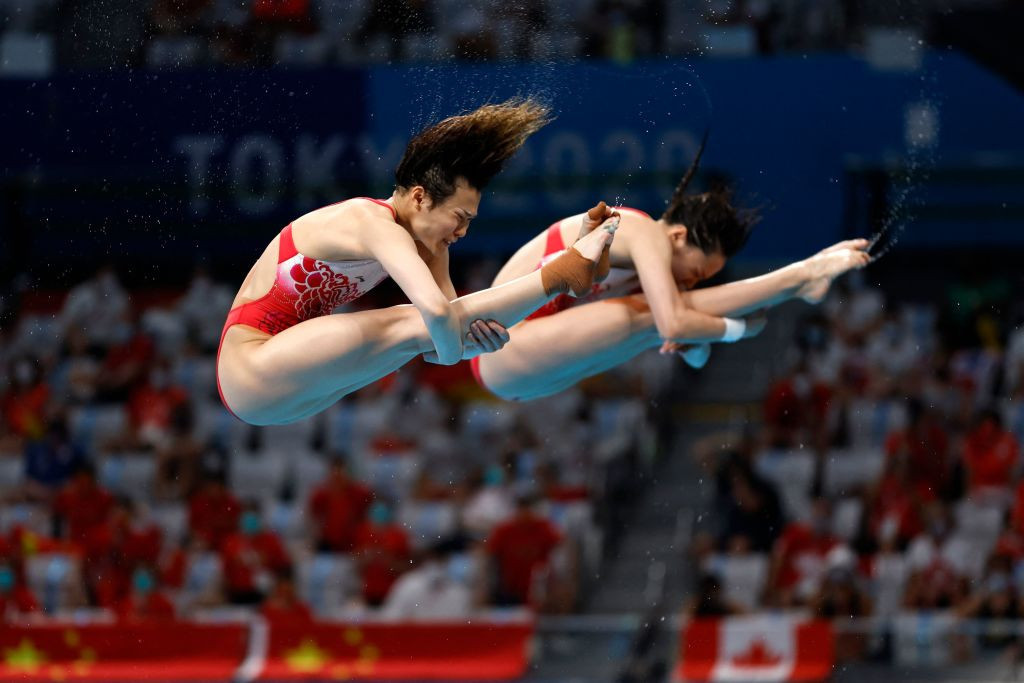 Shi Tingmao and Wang Han made a dominant start to China's pursuit of perfection in diving at the delayed Tokyo 2020 Olympic Games as they produced an elegant and emphatic display to clinch gold in the women's synchronised three metres springboard event.

Shi and Wang justified their status as the red-hot favourites with a commanding performance en route to taking gold with a huge 326.40 points, more than 25 clear of nearest challengers Jennifer Abel and Melissa Citrini-Beaulieu of Canada in second.

Bronze went to Germany's Lena Hentschel and Tina Punzel, who amassed a score of 284.97.

Victory for the Chinese duo handed the country's diving team a fifth straight Olympic title in the event and continued a winning run at major events in the women's synchronised 3m discipline which stretches back to 2001.

The triumph, which was never in doubt and was about as predictable as they come, gave Shi a third Olympic gold medal and Wang her first title at the Games.

China is expected to win all eight Olympic gold medals in diving at Tokyo 2020.

"For us wonderful to have the opportunity to even hold the Olympics, we’re very grateful to all of the hard work the organisers and volunteers and the people of Japan have put in to making this opportunity available for us," said Shi.

"Even though we couldn’t hear our audience, we still felt very supported throughout the competition."

Wang revelled in climbing to the top of an Olympic podium for the first time and at the age of 30.

"Prior to the very final round, we had lots of steps that were happy, sad, bitter, wonderful, it was all over the place," she said

"But of course we are so happy to have won the gold.

"For me, personally, I am 30, so for me to get the gold for the first time in the Olympics is a wonderful way to be rewarded for all of these years."

The Chinese pairing saved their best dive until last, an inward two-and-a-half somersaults in the pike position which was rewarded with a score of 75.60 points.

It was clear from the start that the seven other teams were battling for silver and bronze, and the race for second was won by a tearful Abel and Citrini-Beaulieu.

The medallists draped their silverware over their partners' necks during the ceremony, where they were not allowed to receive them from International Olympic Committee vice-president Nicole Hoevertsz - a former synchronised swimmer - because of COVID-19 protocols.

Diving action at the Tokyo 2020 Olympics is set to continue tomorrow with the men's synchronised 10m platform final.

TOP STORY: insidethegames is reporting LIVE from the IBA Extraordinary Congress in Aremenia