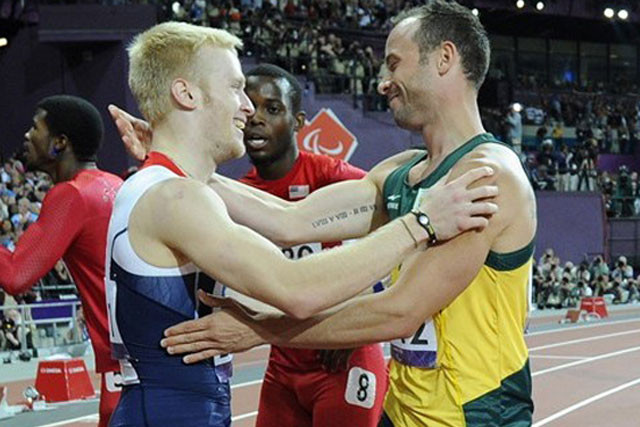 Disgraced Paralympic champion Oscar Pistorius has unwittingly been caught up in controversy in the campaign to choose a new Prime Minister in the United Kingdom to replace Boris Johnson.

The convicted murderer had been featured in a video by the UK’s International Trade Minister Penny Mordaunt released today as she announced she would be standing to replace Johnson as leader of the ruling Conservative Party.

The footage also featured Britain’s Jonnie Peacock winning a Paralympic Games gold medal in the T44 100 metres at London 2012 in a clip that included scenes of a smiling Pistorius, who had finished fourth.

The South African was convicted of murdering his girlfriend Reeva Steenkamp after shooting her multiple times through a toilet door at his home in Pretoria on Valentine's Day in 2014, less than two years after London 2012 where he won three medals, including two gold.

Pistorius, winner of a total of six Paralympic gold medals, claimed he had mistaken his girlfriend for an intruder, but was found guilty of manslaughter and sentenced to five years in prison.

His sentence was increased to 13 years and five months in 2015 after being found guilty of murder on appeal.

I officially request to be removed from this video…. Anything but blue please ?

Peacock took to Twitter to ask Mordaunt to remove the footage, although his objection appears to be more about being used in a video featuring a Conservative rather than appearing alongside Pistorius.

"I officially request to be removed from this video…. Anything but blue please," he wrote in a post accompanied by a smiling emoji.

Following criticism of the inclusion of Pistorius, Mordaunt later deleted the entire footage on sport.

Social media users had noted the insensitivity of Mordaunt featuring a convicted murderer in her video.

Dan Crawford, a Labour councillor in Ealing, tweeted: "Bold to feature Oscar Pistorius in the video that launches your leadership campaign, Penny."

Also, your name is currently trending with Oscar Pistorius, LOL. I thought there must be some innocent explanation for that, but no, it's because you included footage of him racing in your campaign video. Some defender of women.

Another tweeted: "I don’t know how it isn’t a sketch or parody.

"Is anyone going to comment how there’s not even a single millisecond of footage of the actual candidate? But there is of… Oscar Pistorius? You couldn’t make it up."

Another asked Mordaunt: "Why is Oscar Pistorius in your video? You’re supposed to be convincing women you care about them, remember!"

The 35-year-old Pistorius is now eligible for parole after serving half of his sentence and last month met the father of Steenkamp as part of the process.