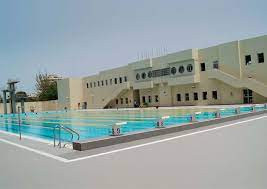 Ground has been broken on the redevelopment of the Tour de I'Oeuf Complex, the swimming venue for the 2026 Summer Youth Olympic Games in Dakar.

Senegalese officials have decided to the re-build the existing facility as several defects and design flaws had been discovered.

The Government in Senegal has decided to repurpose existing facilities rather than build new ones.

As well as hosting the aquatic events during the Youth Olympics, the facility will also play host to an International Swimming Federation (FINA) scholarship training centre, which ensures its legacy after the Games.

The 10-lane competition venue will have 562 seats, while a six-lane training pool will have capacity for 800 spectators.

There will also be a diving pool with 688 seats.

The facility will have an Omega timing system.

It will include 20 bedrooms, a gymnasium and strength and conditioning room, meeting rooms, a restaurant, recreation facilities and laundry and cleaning services.

Free WiFi will be provided.

Dakar is a region where swimming plays a very important role, according to FINA.

With more than 500 kilometres of coast and a large number of facilities, clubs and organisations, swimming is a leading sport in the Senegal.

The Games were postponed by four years from 2022 last summer, with the IOC citing the "challenges faced by the organisation, National Olympic Committees and International Federations" after Tokyo 2020 was delayed by a year.

The Youth Olympic Games are open to athletes aged 15 to 18 on December 31 in the year of the Games.

The summer edition of the event was held for the first time in Singapore in 2010, and most recently in the Argentinian capital Buenos Aires in 2018.