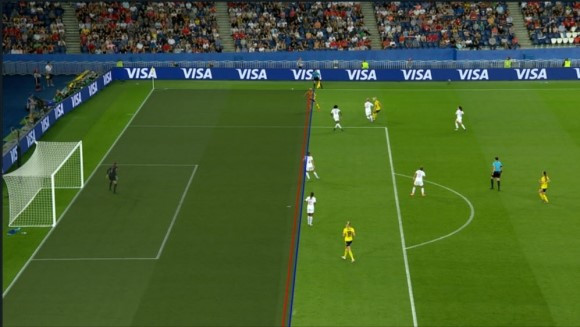 Semi-automated offside technology will be trialled at the FIFA Arab Cup with a view to potentially using the system at next year's World Cup in Qatar.

FIFA chief refereeing officer Pierluigi Collina said the trial at the tournament in Qatar, which begins tomorrow, will be the "most important so far".

It works using between 10 and 12 cameras which collect up to 29 data points for every player 50 times per second.

If it spots a possible offside, a message is sent to the video assistant referee (VAR), which makes the final decision.

"VAR has had a very positive impact in football and the number of major mistakes is reduced, but there are areas where it can be improved - and offside is one of them," Collina said.

"We are aware the process to check offsides can take longer [than other decisions], especially when it is very tight.

"We are also aware that the positioning of the lines may not be 100 per cent accurate.

"For this reason FIFA is developing a technology which could offer faster and more accurate answers."

Collina added: "For offside the decision is taken after analysing the position of players, but also their involvement in play.

"Technology can draw a line but the assessment remains in the referee's hands.

A total of 16 teams from Asia and Africa will contest the Arab Cup, a test event for the Qatar 2022 World Cup.

The tournament has been held nine times before, with Morocco the most recent winners after beating Libya in the final the last time it was played in 2012 in Saudi Arabia.

However, with the usual warm-up event for World Cup hosts, the Confederations Cup, abolished in 2019, this will be the first pan-Arab contest organised by FIFA.

Matches will take place across six venues in Qatar, all of which will be used for the World Cup next year.

Supporters attending matches at the tournament are required to be fully vaccinated against COVID-19.

The build-up to the tournament has been dominated by Qatar's record on human rights and scrutiny of its treatment of migrant workers.