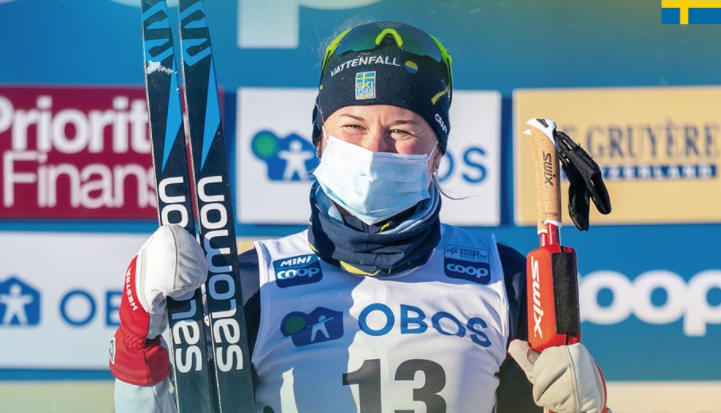 Maja Dahlqvist won her first Cross-Country World Cup title in the freestyle sprint on the home snow of Ulricehamn today, and Oskar Svensson then came through in the men’s race to make it a Swedish double.

Russia’s leader of the overall International Ski Federation (FIS) Cross-Country standings, Alexander Bolshunov, was not in the field on this occasion, but his team was able to welcome back Sergey Ustiugov following his COVID-19 infection in the autumn.

The latter reached the six-man final, finishing sixth as his team-mate Gleb Retivykh took silver after being passed by Svensson on the final 20-metres stretch, with Italy’s Federico Pellegrino finishing third ahead of France’s Richard Jouve.

"I used the last bolt of energy I had left in my body," Svensson told FIS.

"Because on top of the hill after Ustiugov's fast start I felt like I could not keep up but then I just gave it all I could," said Svensson after claiming his second World Cup victory within a month, after the Sprint C in Val di Fiemme.

"I can't actually believe I won this race, it's fantastic."

Dahlqvist, 26, finished clear of fellow Swede Johanna Hagstroem, with third place going to Jessie Diggins of the United States, who frustrated home hopes of a clean sweep by keeping Hanna Falk at bay.

"I just had a really great day and everything worked out perfectly, my skis, my shape and the course that really suits me," said Dahlqvist.

"It feels so great to finally have my first World Cup victory."

Third place enabled Diggins to maintain her own huge lead in the overall standings, and established her in fourth place in the sprint standings.

Tomorrow’s schedule is set to feature the men’s and women’s team sprints.