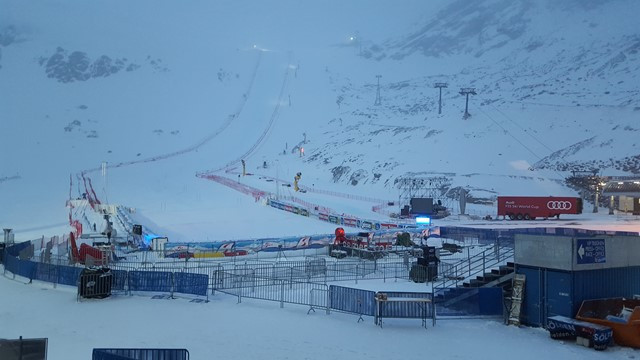 With wind gusts up to 120 kilometres per hour measured at the Pitztaler weather station, and a forecast for worsening conditions later in the day, it was a quick decision for the jury, who immediately determined that the conditions would be too dangerous for the athletes.

By midday, the entire Rettenbach glacier in Soelden had to be evacuated due to the storm.

"The local authority, the Organising Committee and the race jury came together at 5.30 this morning to evaluate the situation on the glacier," FIS chief race director Markus Waldner said.

"At first, we decided to stand by and delay the final decision to 6.45.

"However, the situation didn’t improve and according to the updated forecast the wind gusts will get even stronger and the safety can no longer be guaranteed.

"We had no other choice than to cancel."

The race will not be rearranged meaning there will be one less giant slalom on the 2017-2018 men’s calendar.

"As per World Cup rule 18.1, the World Cup opening races which have to be cancelled during the opening are not rescheduled," an FIS statement reads.

The start of yesterday’s women’s race on the same hill had to be lowered because of fierce winds.

Germany’s Viktoria Rebensburg fought back from a mistake in her first run to top the podium.

The FIS Alpine Skiing World Cup is due to resume on November 11, when a women’s slalom is scheduled o take place.

A men’s slalom is scheduled for the following day.