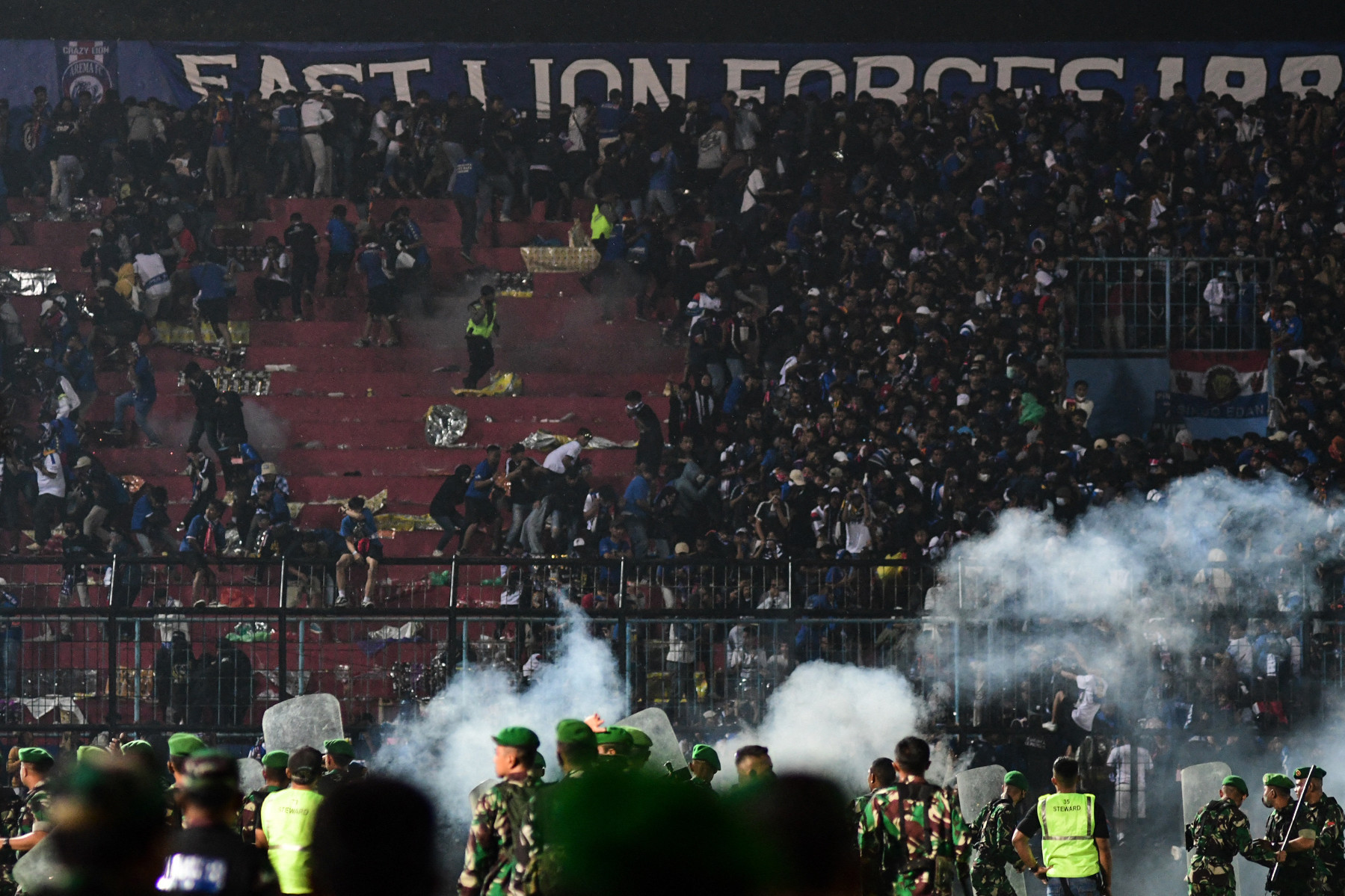 At least 125 people have died at an Indonesian Premier League football match after police fired tear gas, leading to a stampede in which fans were trampled and crushed in one of the worst sporting disasters in history.

Approximately 180 were also injured during the disastrous scenes following Arema FC's 3-2 loss to rivals Persebaya Surabaya at home in Malang in East Java.

Home fans invaded the Kanjuruhan Stadium pitch and allegedly threw missiles at players and officials in anger at their first defeat to Persebaya Surabaya on home territory in 23 years.

Violence also spread to outside the venue, with at least five police vehicles overturned and set on fire.

Riot police fired tear gas in response, including cannisters being directed into the stands.

The authorities' response led to thousands exiting the venue in panic, causing a stampede and some people to suffocate or be trampled, East Java police chief Nico Afinta told reporters.

Children are among the victims.

Afinta said: "We have already done a preventive action before finally firing the tear gas as [fans] began to attack the police, acting anarchically and burning vehicles."

Afinta suggested that "not all of them were anarchic" and this related to "only about 3,000 who entered the pitch".

The initial death toll was set at 130, officials announced it had risen to 174, and now it is said to be 125 as some victims were counted twice.

Don't go wrong way. R.I.P. for all victims and their families. #indonesia pic.twitter.com/sgDFnfqWOV

Afinta said that more than 300 people were taken to nearby hospitals but many died on their way and while receiving treatment.

The Indonesian Football Association (PSSI) has suspended the top division and banned Arema from hosting fixtures for the remainder of the season.

Indonesian President Joko Widodo has ordered the Sports Minister, national police chief and PSSI chairman to complete a full investigation into the match and its security arrangements as well as prohibiting the league to return until it has concluded.

Widodo voiced his condolences for the stadium disaster.

"I deeply regret this tragedy and I hope this is the last soccer tragedy in this country," he said.

"Don't let another human tragedy like this happen in the future.

"We must continue to maintain sportsmanship, humanity and a sense of brotherhood of the Indonesian nation."

Videos on social media show fans climbing over fences to escape the tear gas while others capture lifeless bodies on the floor.

The PSSI confirmed it has launched an investigation and said the scenes had "tarnished the face of Indonesian football".

Malang police chief Ferli Hidayat claimed that roughly 42,000 fans attended the match despite the stadium having a stated capacity of 38,000.

Arema spectators were the only set of fans allowed to attend the match as Persebaya's supporters were banned in an effort to prevent trouble.

Menpora Zainudin Amali, the Indonesian Sports Minister, told Radio Elshinta that he hopes "we will not be sanctioned by FIFA" and lose the hosting rights.

Bali is due to host the 2023 Association of National Olympic Committees World Beach Games and Indonesia has also set its sights on the 2036 Olympics.

Widodo has demanded this to be the "last soccer tragedy in the nation".

"The football world is in a state of shock following the tragic incidents that have taken place in Indonesia at the end of the match between Arema FC and Persebaya Surabaya at the Kanjuruhan Stadium," Infantino said.

"This is a dark day for all involved in football and a tragedy beyond comprehension.

"I extend my deepest condolences to the families and friends of the victims who lost their lives following this tragic incident."

The International Olympic Committee has also issued a statement.

"My thoughts are with the families and friends of the victims of the terrible stampede in a football stadium in Indonesia," President Thomas Bach said.