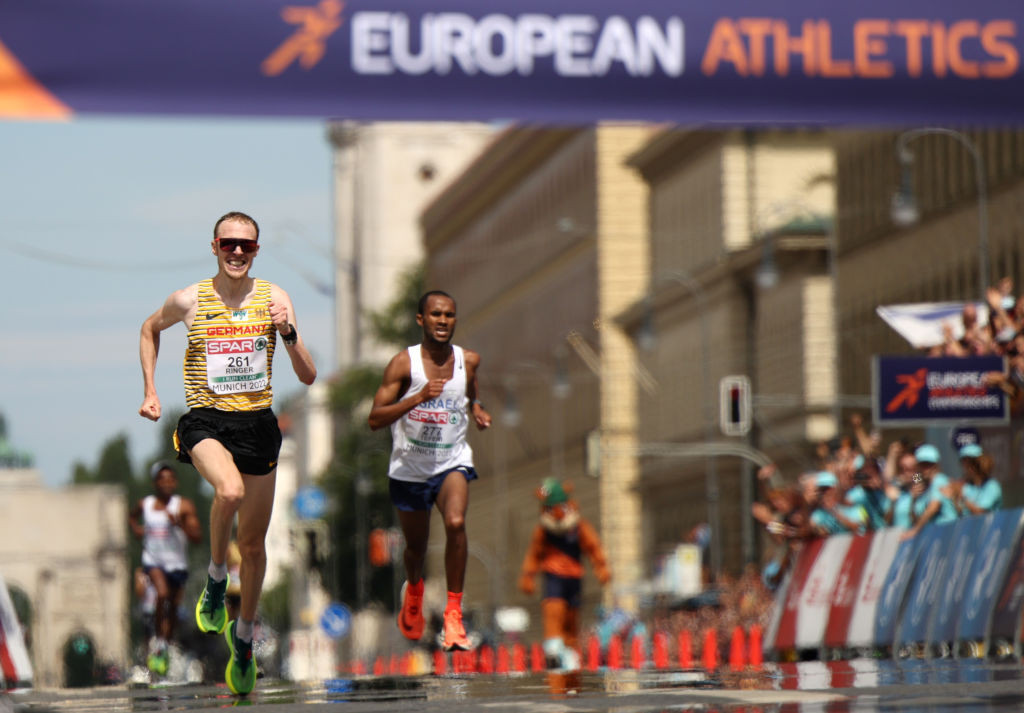 Germany’s Richard Ringer earned the European men’s marathon title in dramatic fashion here as a final sprint saw him overtake the leader, Israel's Maru Teferi, in the final 20 metres to the huge acclaim of fans packing the grandstands.

Teferi, who arrived in Israel from Ethiopia in 2006, dedicated his medal to "all the families of the victims" of the attack on Israeli athletes during the Munich 1972 Olympics.

His result, and the bronze medal earned by team-mate Gashau Ayale, helped Israel win team gold on the opening day of athletics at the European Championships Munich 2022.

"It was an excellent team effort of the team Israel," Teferi said.

"We are very pleased with it especially because these championships mark the 50th anniversary of the tragic events that took place here in Munich in 1972.

"I would like to dedicate this medal to all the families of the victims, and to send my love to everyone.

"As soon as we realised that these championships were going to take place here in Munich, we felt it in the heart, an inner strength to [do] the best we can to honour those families.

"I did not really see the German athlete catching up, I only realised it when he was so close to the finish line, but overall, I came second and I am very happy with this medal."

Ringer, 32, had moved ahead of the five-man leading group after 39 of the 42.195 kilometres, but by 40km it seemed his effort was over and he appeared to be hanging on doggedly to bronze as his team-mate Amanal Petros contested the lead with Teferi.

In the closing kilometre Ringer found the energy to overtake Petros, who eventually finished fourth, but the Israeli athlete, running easily, seemed beyond range.

Not so - as Ringer closed down and then passed his rival metres from the line, eliciting a huge roar from the spectators in the grandstands and lining the course.

The women’s race, which had begun in overcast conditions, also finished in dramatic circumstances as Poland’s Aleksandra Lisovska, her face contorted with effort, won an attritional contest to take the first title of the 2022 European Athletics Championships in 2:28.36.

Having been 11 seconds clear at 41km, the Pole eventually had a winning margin of just six seconds as Croatia’s fast-finishing Matea Parlov Koštro emerged from a wringing struggle between three chasing athletes to claim silver in 2:28.42.

Had the course been a kilometre longer, it seemed she might have had gold.

Although the Polish winner begged to differ.

The bronze went, just, to Nienke Brinkman of The Netherlands from Germany’s Miriam Dattke, with both being given the same time of 2:28.52 after an extended and agonising struggle over the final kilometre.

A couple of minutes before she also finished like a 5,000 metres runner it looked as if Parlov Koštro would be the one to miss out on medals in the women’s race as she lagged behind the other two athletes chasing the Polish leader and began looking behind her.

But from somewhere she found new energy, and the battle for bronze continued all the way down Ludwigstraße with Brinkman - a former hockey player who only took up serious running during the pandemic - just doing enough to make the podium ahead of Dattke.

While a medal may just have eluded the German runner, her placing, and that of colleagues, ensured that gold was secured in the team event with a total time of 7:28.48, with Spain taking silver in 7:39.25 and Poland bronze in 7:40.54.

"Before the race, I did not believe this could happen and still cannot believe it right now that I am the European champion - even though I was fully prepared for this, and I knew I was considered one of the medal favourites, especially after breaking the Polish record last year," said Lisowska.

"Even in the last 100m, when I turned around and saw the Croatian athlete was coming closer, I was not worried.

"I knew I had it under control.

"Actually, I was waiting for that moment so I could give it one final kick."