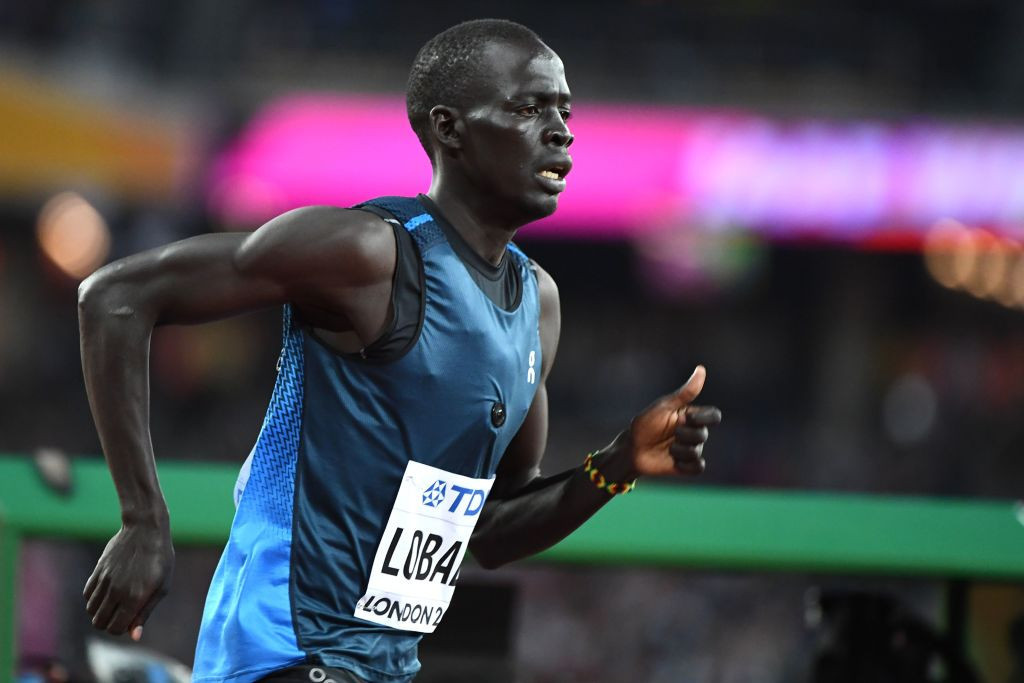 Local hero Mondo Duplantis produced the most popular result at Stockholm’s Wanda Diamond League meeting as he cleared 6.16 metres, the best outdoor pole vault ever - but the most astonishing performance was a landmark victory by former Athlete Refugee Team (ART) runner Dominic Lobalu.

The 23-year-old Swiss-based runner, who competed for the ART at competitions including the London 2017 World Championships and 2017 World Relays before reverting to his country of origin, South Sudan, in 2019, won the men’s 3,000 metres in the fastest time recorded this year, knocking 20 seconds off his best in clocking 7min 29.48sec.

Lobalu, who recently ran a 1500m personal best of 3min 39sec in Berne, was not reckoned to be a serious challenger in a race where Uganda’s 21-year-old Olympic 10,000m bronze medallist and world half marathon champion Jacob Kiplimo took over from Australia’s Stewart McSweyn at the bell and accelerated towards what appeared a perfectly judged victory.

But Lobalu moved from fourth to first over the final 150 metres, edging past the staggering - and staggered - Ugandan, second in 7:29.55, a few metres from the line.

"It was the first time ever that I competed," Lobalu said.

"At the start I was a little bit scared.

"At the end I started to pick up the athletes and the last 100m I thought that I could win.

"I believed in it all the time - never give up.

"So I am very happy with the victory.

"I really wanted to be the first refugee to win.

"I want to motivate other refugees too."

A #DiamondLeague record, a PB and an outdoor world best in front of his home crowd from #Duplantis!

Duplantis, 22, will be at those Championships seeking the only major title he is missing having won Olympic gold last summer.

He raised his own outright world record to 6.20m earlier this year in winning the world indoor title, and he won this competition with a clearance of 6.03m before setting the bar at a centimetre above the height he cleared in Rome two years ago - and clearing it with aplomb.

"I felt I was in shape and that I have a great support here in Stockholm, where I live now, so that means so extra more," Duplantis said.

"I feel like I am definitely in shape to win my title and maybe to do something special in Eugene."

This Bauhausgalan meeting had got underway under a metaphorical cloud with news that Italy’s Olympic 100m champion Marcell Jacobs, due to make his first big race appearance of the season here after recovering from a muscle injury, had made a late decision to withdraw as a precaution after feeling further pain in training.

"This morning we assessed the situation, but his body’s giving signs of discomfort.

"Fifteen days away from the Worlds, we couldn’t take the risk to run this evening."

In the absence of Jacobs, victory went to South Africa’s Commonwealth champion Akani Simbine in 10.02sec, from Britain’s Reece Prescod, who clocked 10.15.

Mykolas #Alekna broke the meeting record in the first round of the discus with 69.81, but Kristjan #Čeh has just gone one better with 70.02 in the 5th round.

But the metaphorical sun shone ever more brightly on a blustery evening in Stockholm’s Olympic Stadium thanks to a series of surprising and outstanding efforts.

While Tokyo 2020 champion Sydney McLaughlin has been operating in a realm of her own this season, having reduced the world record of 51.46 set in winning the Olympic title to 51.41 in Eugene last weekend, the 22-year-old Dutch athlete has been running successively faster in every race this season and looks ready to offer another huge challenge to her at next month’s World Championships.

In the men’s 400m hurdles, meanwhile, Brazil’s 22-year-old Olympic bronze medallist Allison dos Santos earned victory in the fastest time recorded this year, 46.80sec, which also broke the meeting record of 46.87 set in 2020 by Olympic champion and world record holder Karsten Warholm, currently recovering from the hamstring injury he suffered after one hurdle of his first race of the season in Rabat earlier this month.

"I think about the world record every day, every night, I dream of that," said dos Santos.

While Duplantis enjoyed another night of mastery, Sweden’s other performing Olympic champion, discus thrower Daniel Stahl, suffered yet another Diamond League defeat at the hands of his 23-year-old Slovenian rival Kristjan Ceh, who won with a fifth-round effort of 70.02m.

That surpassed the meeting record of 69.81m set in the first round by Lithuania’s 19-year-old Mykolas Alekna, son of the Sydney 2000 and Athens 2004 Olympic discus champion Virgilijus, who won the world under-20 title in Nairobi last year.

Stahl had to settle for third place with 67.57m.

"I think I just broke the world best mark in my age category," said Alekna.

"Honestly, I did not expect to throw that far today - it was just perfect.

"On Saturday I am going to my university in California and then I will be heading to Oregon after 10 days of training."

Britain’s world 200m champion Dina Asher-Smith, who has been running well but not outstandingly so far this year, earned a hugely timely win over Switzerland’s world indoor champion Mujinga Kambundji, by just three thousandths of a second - 22.364 to 22.367.

Peters, whose personal best of 93.08m at the opening Diamond League meeting of the season in Doha put him fifth on the world all-time list, overtook Chopra’s first-round lead of 89.94m, a national record, with a third-round meeting record of 90.31m.

"I thought I could throw 90 metres today, but slow improvement is good!" said Chopra.

Tokyo 2020 800m silver medallist Keely Hodgkinson suffered her first defeat of the season over her specialist distance as Kenya’s Mary Moraa won in 1:57.68, with the 20-year-old Briton second in 1:58.18.

There was another surprise in the women’s high jump, where world silver medallist and Olympic bronze medallist Yaroslava Mahuchikh, who cleared a 2022 best of 2.03m last week, had to take second place after failing to clear 1.96m, with victory going to Australia’s Eleanor Patterson, who was the only one to get over that height.

Britain’s Lorraine Ugen also sprang a surprise in the women’s long jump, winning in a season’s best of 6.81m produced in the fifth round of a competition which took part into consistent headwinds.

Puerto Rico’s Tokyo 2020 champion Jasmine Camacho-Quinn maintained her predominance in the women’s 100m hurdles as she won in 12.46sec against a stacked field that included Nigeria’s Tobi Amusan, who recently set an African record of 12.41, and world champion Nia Ali.

Chase Ealey of the United States won the women’s shot put with an effort that was just three centimetres short of her national record of 20.51 metres at the US world trials in Eugene.

An evening of surprises concluded with a men’s 800m in which Kenya’s Olympic champion Emmanuel Korir finished fifth in 1:45.85 in a race won by Algeria’s Slimane Moula in 1:44.60.