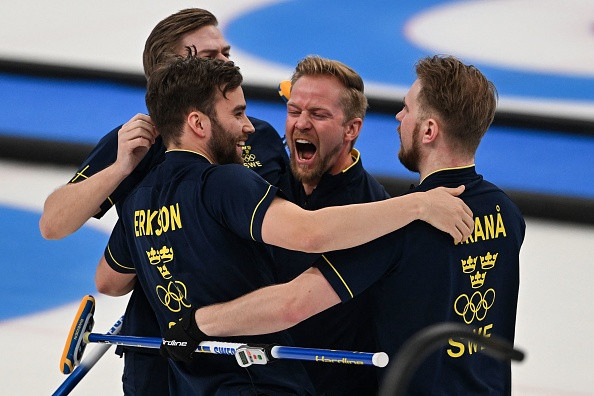 Niklas Edin's Sweden finally won the Olympic gold medal in men's curling at his fourth attempt with an extra-end victory over Bruce Mouat's resilient British side here at the National Aquatics Centre on the penultimate day of the Beijing 2022 Winter Olympic Games.

Edin debuted at the Olympics at Vancouver 2010, narrowly missing the podium when defeated by Switzerland in the bronze medal match.

Sweden were favourites to take gold at Pyeongchang 2018 only to suffer a shock defeat to John Shuster's United States, who finished fourth at these Games.

A pattern formed that pointed towards winning the gold medal in Beijing and Edin's rink - also featuring Oskar Eriksson, Rasmus Wranå, Christoffer Sundgren and alternate Daniel Magnusson - delivered on that, winning in an extra end against Britain.

After losing their second round-robin match to Shuster's side, Mouat - and his team of Grant Hardie, Bobby Lammie, Hammy McMillan Jr. and alternate Ross Whyte went on a run of eight wins without defeat to top the table and come into the final as the top seeds.

Britain won in the round-robin 7-6 against Sweden, but it was Edin who looked in control this time.

Mouat scored the opener with the hammer, but the Swedes had the advantage early on when they scored the only two-point end of the match.

Edin then stole for another in the third to make it a hard journey back for the all-Scottish quartet.

A tight shot - swept well by Lammie and McMillan - gave Britain one back in the fourth and they stole in the seventh to level it, after two blank ends.

Sweden regained the lead in the eighth and Britain made it 4-4 in the 10th end after blanking the ninth.

Edin's precision was key to Sweden's success, with the 36-year-old twice knocking out snug British stones which looked near-certain to allow Mouat's team to score two and snatch the win at the death.

With the hammer in the extra end, Edin set up a difficult position for the all-Scottish quartet to steal.

With a stone left each, Mouat tried a trick shot by hitting a rogue rock of his own to roll into the centre, but narrowly missed his mark.

It gave Team Edin the 5-4 win without requiring them to play the last stone, securing Sweden's first men's curling Olympic title, despite the nation long being one of the most dominant outfits in the sport.

Mouat's silver matched that of Murdoch in 2014, who is the British national team coach for the Games.

"It's an insane end to this tournament, both the semi-final [against Canada] and the final are incredibly well-played and tough matches," said Edin after the match.

"We fought all the way to the end and it was down to millimetres in many situations in both games.

"It's obviously been an incredibly long journey with pretty disappointing defeats in a couple of the previous (Games)."

The skip hinted at retirement in his interviews following the victory too, but also added more can be won before Milan Cortina 2026.

"There's lots of time left [until the next Olympic Winter Games] so we will talk about this afterwards, how the rest of our careers will be, but it’s been many nice years and a lot of success and to get this Olympic gold medal now is an extra tick in the career, then we will see how to bring it further," Edin added.

Shuster's team had a big challenge with the hammer in the final end and a two-point deficit, but were unable to follow up their underdog story with another medal.

Having long been dominant at the Games, the bronze was still the second-lowest Canada has finished in the men's tournament, following their fourth-place finish in 2018 when skipped by Kevin Koe.