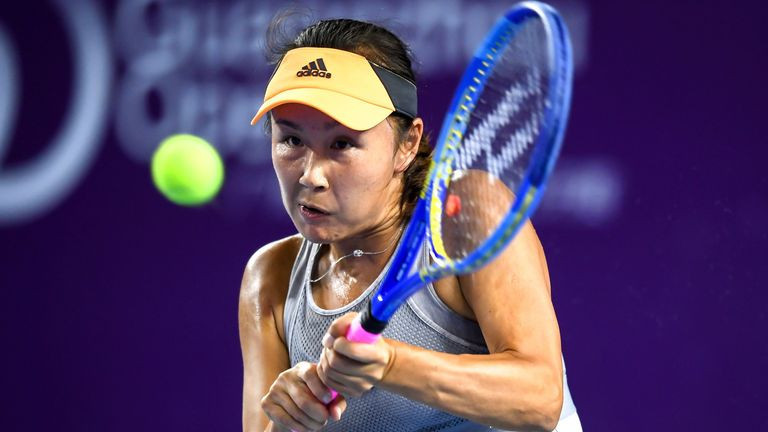 The International Olympic Committee (IOC) has been warned attending a dinner with tennis player Peng Shuai during the Beijing 2022 would be an "inappropriate move", with the organisation urged to ensure there is a transparent investigation into her allegations of sexual assault.

IOC President Thomas Bach is expected to meet with Peng inside the closed loop at the Winter Olympic Games here.

The IOC claims it has "kept in touch" with Peng whose whereabouts and safety has become a cause for global concern after making sexual assault allegations against a high-ranking Chinese Communist Party (CCP) official.

In November, Peng published a post on Chinese social media platform Weibo in which she alleged Zhang Gaoli, a former senior vice-premier and senior CCP official, sexually assaulted her 10 years ago.

This was deleted within 20 minutes, and the three-time Olympian was not seen for more than two weeks afterwards.

Peng last month reportedly retracted the allegations but there have been concerns raised over the legitimacy of her comments and her ability to speak freely.

The potential dinner with Bach and Peng, will reportedly also been attended by Li Lingwei, vice-president of the Chinese Olympic Committee.

The meeting has been described as "inappropriate" by Julie Ann Rivers-Cochran, executive director of The Army of Survivors, a survivor-founded organisation formed in response to the Larry Nassar sexual abuse scandal in USA Gymnastics.

"Not only is it a terrible idea, it is also a dangerous idea," Rivers-Cochran said.

"It is a highly inappropriate move, that fails to consider the effects of trauma and will ultimately be retraumatising.

"To think that Peng Shaui has the right or the ability to speak freely to consent to this request without pressure is misguided at best.

"I think it is a poor move from the IOC as it perpetuates their inaction over her initial disclosure.

"Even if a survivor retracts, there is usually a reason behind it, a threat etc.

"The IOC are not considering the effects of control around sexual assault."

Rivers-Cochran warned that the IOC’s response to the Peng Shuai case could set the tone for survivors, who may by reluctant to come forward with their own experiences of sexual assault.

Concerns have been raised over human rights in the build-up to the Winter Olympics, due to open here on Friday (February 4).

The Beijing 2022 Host City Contract with the IOC promises free and open access to the internet and social media for all participants.

For journalists, it states "there shall be no restrictions or limitations on the freedom of the media to provide independent news coverage".

But Minky Worden, director of global initiatives at Human Rights Watch, warned the Games are "not business as usual" for athletes and journalists.

"They are not business as usual for athletes, who are being directly threatened not to speak out by the host, that is not a normal working environment," she said.

"It is a hazardous working environment for journalists, who are going into a situation where they might not be able to contact their own offices.

"The three ways the press freedoms are protected, the host city contract, the athletes reporting mechanism and the Olympic Charter itself, none of these things seem to be in operation."

The International Federation of Journalists has also written to the IOC to express concerns over working conditions of journalists at the Winter Olympics.

"We are calling on the Olympics Committee to take a clear stand for journalists’ rights and unequivocally tell the Chinese authorities that they must commit to fundamental press freedom principles and protect journalists’ rights. China must treat our colleagues equally regardless of their country of origin and should not interfere in their communications during their professional stay in China," the IFJ said in an open letter.

"Besides the general crackdown on independent media, the Chinese authorities have repeatedly ignored the demands by the Foreign Correspondents Club of China to improve the working environment for journalists covering the Winter Olympics and have planned deep restrictions over journalists’ freedom of movement which will lead to inevitable censorship and limited reporting during the Games."

Nations including Australia, Belgium, Britain, Canada, Denmark, Estonia, Lithuania, New Zealand and the United States have opted not to send Government officials to the Games.

The diplomatic boycott has largely come in response to China’s treatment of the Uyghur population, with the host nation having faced accusations of a genocide.

"NoBeijing2022" campaigners have issued a call for the public boycott what it labels as "Genocide Games", with the launch of a #IWillNotWatch campaign.

Beijing has claimed camps are training centres for stamping out Islamist extremism and separatism.

Chinese official state newspaper China Daily also claimed last week to have spoken to sources that claimed the United States have sought to "entice" athletes to create disturbances at Beijing 2022 to politicise the Games.