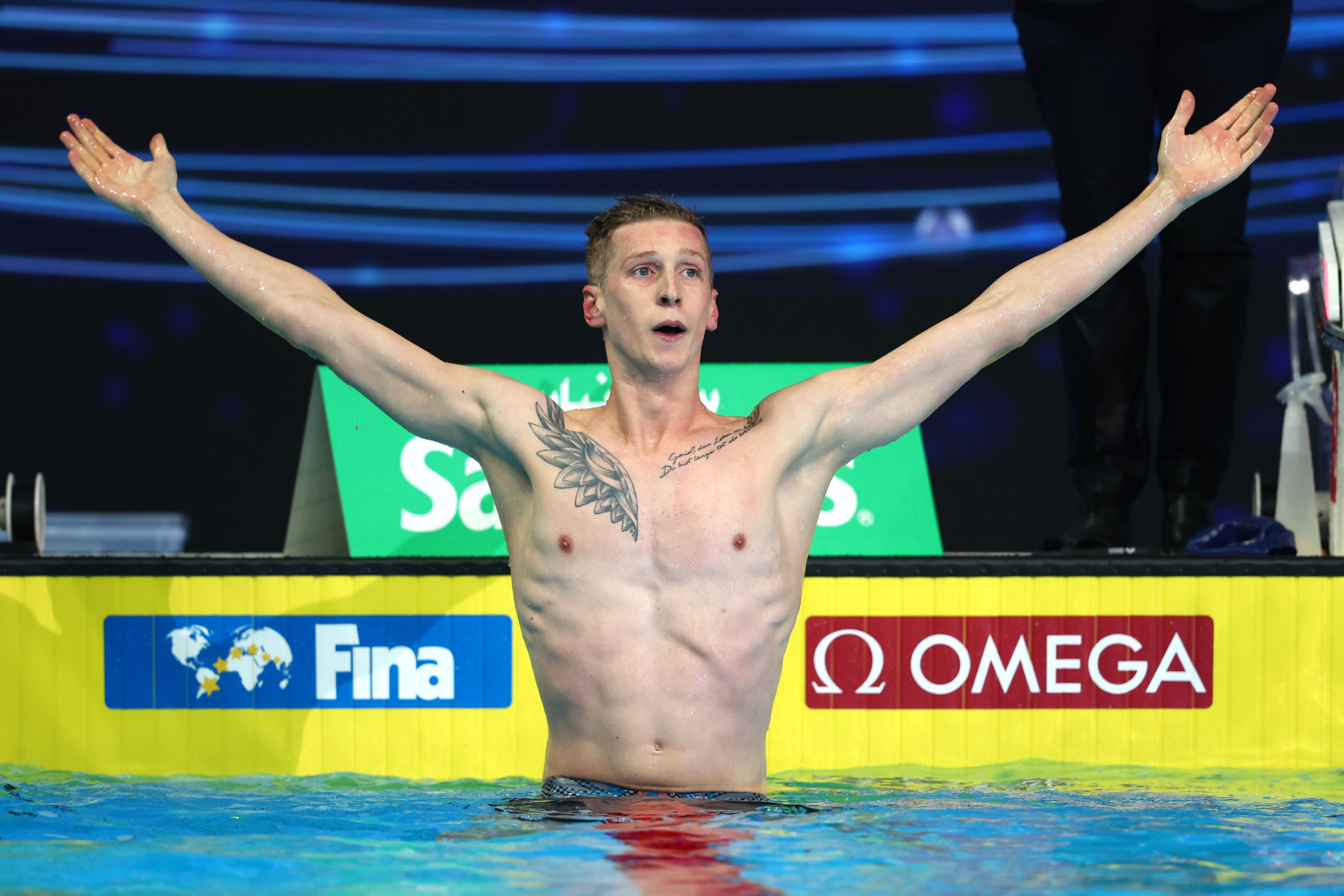 Wellbrock posted a sensational time of 14min 6.88sec – smashing the previous record of 14:08.06 set by Italy's Gregorio Paltrinieri in 2015.

The 24-year-old leaves the capital of the United Arab Emirates with two gold medals having won the open water event – which was held as part of the FINA Aquatics Festival.

There was little between Wellbrock and challengers Mykhailo Romanchuk of Ukraine and Tunisia's Ahmed Hafnaoui at the halfway mark, but the German found another gear in the second half of the race as he moved under world-record pace with 250m to go.

The gap grew and grew as Wellbrock put together a sensational performance, claiming victory by a winning margin of four metres.

Margaret Mac Neil of Canada won her fourth gold medal of this year's event with a comeback in the women's 100m butterfly final.

It was an American one-two over the first half of the race as Torri Huske led Claire Curzon.

Mac Neil sat in fourth position at that stage, but she saved her best until last as she clawed her way back before winning in 55.04

Louise Hansson of Sweden earned silver in 55.10, while Curzon nudged Huske out of the medal positions to clinch bronze in 55.39.

It was third time lucky for Sarah Sjöström of Sweden as she produced a championship record-breaking time to win the women's 50m freestyle title.

All eyes were on Sjöström and Ranomi Kromowidjojo of The Netherlands as the two multiple Olympic champions battled it out for top spot.

Sjöström finished second in two individual finals this week but finally came out on top on the final night as she won in 23.08.

Kromowidjojo came second in 23.21 as Katarzyna Wasick of Poland earned bronze in 23.40.

Sjöström then played a key role in Sweden’s 4x100m medley relay success as they prevailed in 3:46.20.

Miressi found himself behind both Joshua Liendo Edwards of Canada and Ryan Held of the United States after the first half of the race.

Held tried to hang on but Miressi came charging back as he snatched the title in 45.57.

Nothing could separate the Russian Swimming Federation (RSF) and the US in the 4x50m medley relay final as they tied for gold, but they were left to battle it out for silver on this occasion as Italy struck gold courtesy of Miressi's superb final leg.

Matteo Rivolta put the Italians ahead before Miressi stormed home as Italy clinched victory in a championship record time of 3:19.76.

Held clinched silver for the US in 3:20.50 as the RSF had to settle with bronze.

The biggest shock of the night came in the men’s 200m backstroke final as Poland's Radoslaw Kawecki stunned the field when he emerged victorious from lane eight.

Germany's Christian Diener and the US' Shaine Casas were seemingly fighting it out for top spot as they were neck and neck in the closing 25m, but Kawecki clawed his way back before touching the wall first in 1:48.68.

Nic Fink of the US completed the breaststroke double as he backed up his 200m success with victory in the 50m final.

It was a gripping fight to the finish with Fink taking the title in 25.53 - just 0.02 ahead of Italy's Nicolo Martinenghi who clocked 25.55.

Fink’s victory was one of three golds for the US this evening as it strengthened its position at the top of the medal table.

Emily Escobedo was forced to dig deep to see off Britain's Molly Renshaw as she bagged gold in the women's 200m breaststroke.

Renshaw looked in superb form over the first three-quarters of the race, but Escobedo triumphed in 2:17.85.

The US also came out on top in the women's 4x50m freestyle relay as they battled back to overhaul a strong Swedish team.

Kate Douglass produced a superb final lap to overtake Hansson to clinch victory for the US in 1:34.22.

The US topped the medal standings with nine golds, nine silvers and 12 bronzes.

Canada finished second with 15 medals including seven golds as Italy completed the top three with five golds in a 16-medal haul.

Russian athletes are competing as the RSF in Abu Dhabi, as part of sanctions imposed by the World Anti-Doping Agency against Russia in December 2018 in connection with the manipulation of data from the Moscow Laboratory.