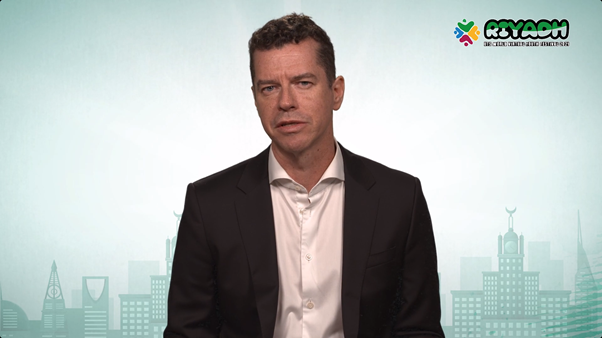 More than 100 organisations are taking part in the event hosted by Saudi Arabian capital Riyadh, which features a series of competitions, exhibitions and discussions aimed at increasing youth participation in sport and encouraging positive life skills and values.

During today's conference session entitled "A New Normal: Moving Forward and Sport Challenges", key officials spoke of the value of sport in the context of the COVID-19 pandemic.

"For the first time in modern history, the Olympic and Paralympic Games have been postponed," Ban said.

"We also have seen solidarity, determination and flexibility of the world sports community.

"We must give our admiration to the Olympic community, the IOC and IPC [International Paralympic Committee] for putting the athletes at the heart of all their actions at the spectacular Tokyo 2020 Games.

"Cooperation is the key to success, and working together can drive positive change, not only in sport but in all walks of life.

"We understand that there are still many challenges ahead, but no doubt, sports can embrace these challenges."

Addressing the Tokyo 2020 Olympic Games, McConnell said the staging of the event had demonstrated the importance of "very clear frameworks" on COVID-19 countermeasures, a "focus on the sport and the athletes" and strong "communication and engagement."

"From my side as the sports director, we tried to keep the International Federation and the athlete community involved and informed every single step of the way, telling them what we were thinking, what decisions were coming up, asking for their feedback, asking for their input, and making sure they knew exactly where we were in the planning of those Games and what it meant for them and hearing their voice every step of the way," McConnell commented.

McConnell went on to discuss the benefits to physical and mental health that can provided by sport, which he said had been illuminated by the pandemic.

"Sport like every part of society has been massively impacted by COVID over the last 18 months," McConnell conceeded.

"I think sport has probably an even greater role to play, an even more important role to play in society moving forward.

"First of all we look at the health aspects that we know sport brings.

"On the physical side we know the benefits of young people, people our age, older people all engaging in sport for physical well-being.

"But one of the other things that has become very clear over the last 18 months is the very important mental health aspects of sport as well.

"We've seen a huge focus on this at the elite level with high-profile cases like Naomi Osaka, Simone Biles and you name it across just about every sport.

"The stigma of mental health has been well and truly removed from elite sport, but we also know that at a grassroots level, at any level of sport, the benefits of playing sport can really help with mental health as well, so for me sport has an even greater role to play moving forward with those physical attributes we knew existed, but with an even greater awareness around the mental health benefits that sport can bring."

The IOC sports director then turned his attention to the role that sport can play in healing divisions across societies.

"Sport can bring together societies at a local level," McConnell claimed.

"Regardless of your beliefs, regardless of religion, belief of any kind, sport can unite people, and we've seen that throughout COVID and even more so in the last few months as crowds have started to come back to certain events around the world.

"Equally, and we saw this from the Olympic Games in Tokyo, sport can bring different societies together.

"It unites people from different countries around one, common, positive thing and that is sport."

Further conference sessions are planned for tomorrow as part of the UTS World Virtual Youth Festival, which are due to cover topics including mental health and well-being in sports, plus virtual events.