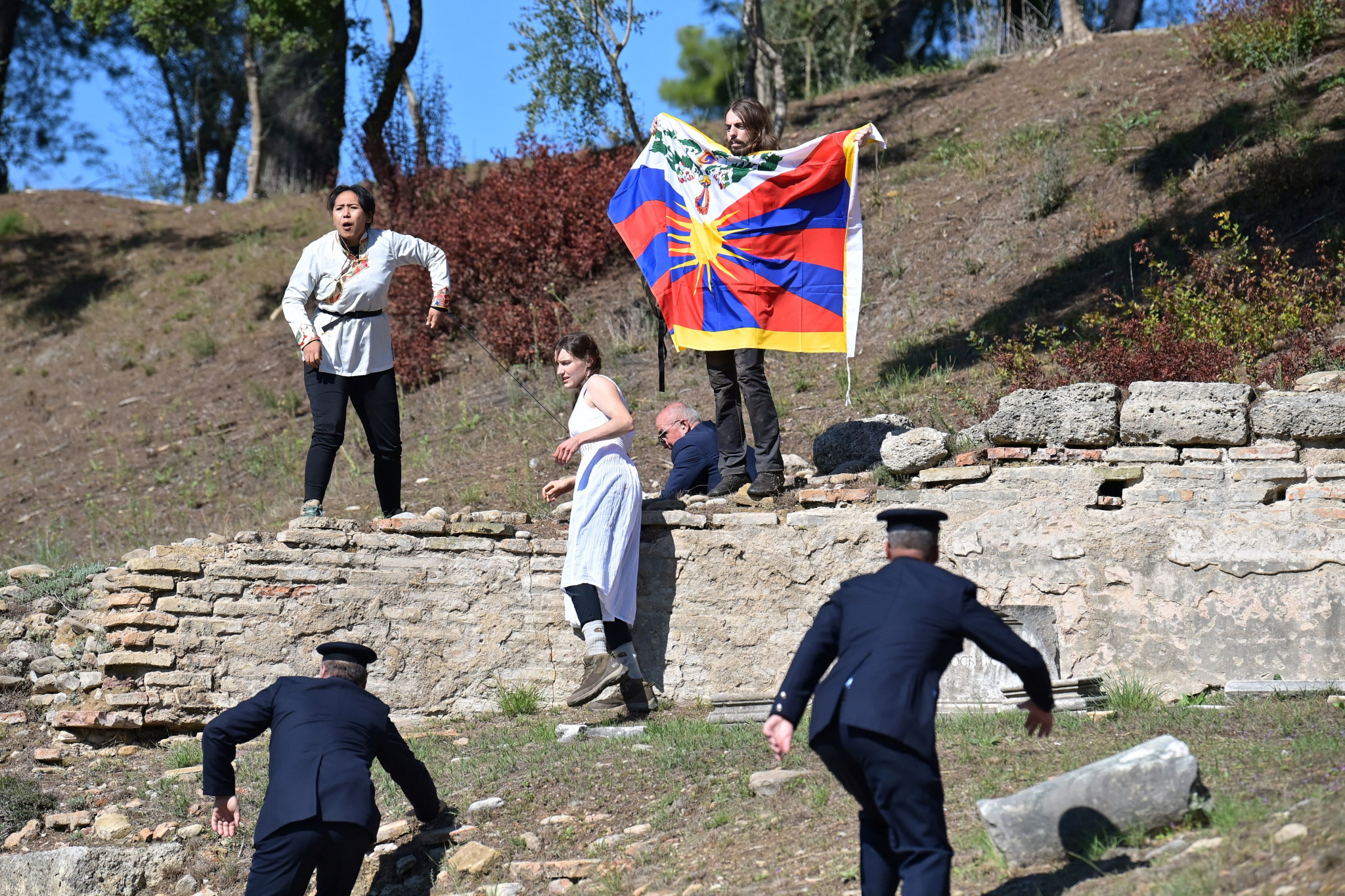 Three Tibetan-rights activists who disrupted the lighting of the Beijing 2022 Olympic Flame have been released from police detention in Greece after appearing in court, it has been confirmed, and have been given a trial date one day before the Opening Ceremony.

As insidethegames exclusively revealed, Chemi Lhamo, Jason Leith and Fern MacDougal were arrested and detained overnight after they waved Tibetan flags and a banner at the ceremony in Ancient Olympia where the Olympic Flame was being kindled.

The three protesters were demonstrating against China hosting next year's Winter Olympics due to its human rights record.

They have been charged with "destruction of a monument", according to campaign group Free Tibet.

Their hearing has been postponed with the trial set to be held on February 3 - one day before the Games are due to open in the Chinese capital.

It is unclear if the trio will attend as they are now free to return home, although a Greek lawyer could appear in their absence.

Leith said they were "happy" to draw attention to the International Olympic Committee's (IOC) "hypocrisy" in offering another Games to China after Beijing staged the Summer Olympics in 2008.

"The Olympics should be about unity, friendship and diversity but these are more than just words and they are meaningless if the Games take place in a country that is systematically oppressing Tibetans, Uyghurs, Hongkongers and others, destroying their cultures and brutally putting down any opposition," he said.

BREAKING - Our incredible activists have just been released, pending trial in February, and are now free to go home.

Here they are outside court a few minutes ago standing defiantly with their message to boycott Beijing! #NoBeijing2022 pic.twitter.com/pJ3VBHH8MA

Lhamo added: "China has no business hosting the 2022 Olympics given that the Chinese Communist Party is hell bent on trying to eliminate the Tibetan identity, genociding the Uyghur people, destroying democracy in Hong Kong, and restricting the language rights of Southern Mongolians.

"A boycott of these Genocide Games is the only proper solution to address these unprecedented crimes.

"I hope that everyone who saw our action during the Torch ceremony takes a moment to truly consider whether they'd like to stand with us or stand against freedom and human rights."

Free Tibet chief executive Sam Walton visited the detained activists before the hearing in Pyrgos, some 18 kilometres from Ancient Olympia.

According to Free Tibet, nine protesters have been either detained or arrested by Greek police for "peacefully protesting or representing the campaign".

On Monday (October 18), Students for a Free Tibet and Tibetan Youth Association Europe activists were held by police for "several hours without ever being accused of a crime", it is claimed.

A day later, two of the same activists were detained after being pulled over by Greek police while taking a taxi back to their hotel, Free Tibet said.

The Lighting Ceremony was not significantly disrupted and the Flame was successfully ignited by High Priestess Xanthi Georgiou and received by skier Ioannis Antoniou, the first bearer in the Relay.

The Ceremony was organised under the auspices of the Hellenic Olympic Committee.

IOC President Thomas Bach insisted at the Lighting Ceremony that only "political neutrality ensures that the Olympic Games can stand above and beyond the political differences that existed in ancient times, as well as today".