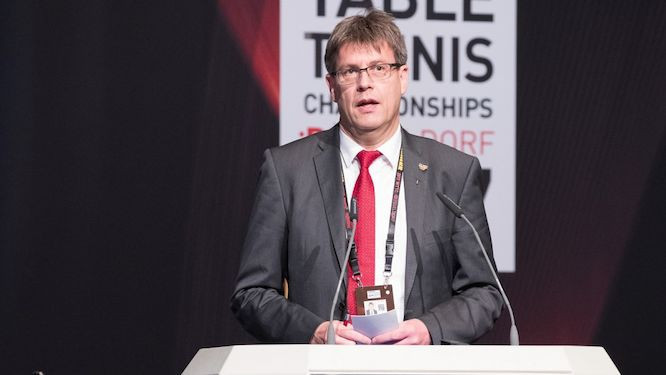 Outgoing International Table Tennis Federation (ITTF) President Thomas Weikert is set to step up a potential run for the top job at the German Olympic Sports Confederation (DOSB) by becoming the head of a regional sports body in the country.

Weikert is currently the only candidate for chairman of the Board of the Limburg-Weilburg sports district, according to German daily newspaper Frankfurter Neue Presse.

German media have tipped Weikert, whose tenure at the helm of the ITTF concludes next month, as a possible successor to Alfons Hörmann at the DOSB.

Assuming the position in Limburg-Weilburg, which has 305 sports clubs with around 77,000 members, could be seen as a boost to Weikert's chances of taking over the highest role in German sport.

Hörmann confirmed in June that he would step down as DOSB President early in the wake of allegations of a "culture of fear" within the organisation, and in a move which avoided the Presidium having to face a vote of no confidence.

Former German President Christian Wulff is leading the hunt for his replacement following his appointment as chair of the DOSB Search Committee.

The Search Committee is set to be in charge of evaluating and selecting candidates for DOSB President on behalf of the organisation, with the election scheduled for December 4.

Weikert has been ITTF President since 2014 but decided against standing for re-election at next month's General Assembly because he does not agree with "the course that the ITTF and World Table Tennis are taking".

The German official has been at the centre of a bitter dispute at the top table of ITTF governance, with the Executive Committee telling Weikert in March he had lost its "trust, confidence and support" and resolving to take all decisions on a majority basis until the Elective General Assembly.

Petra Sörling, the ITTF's executive vice-president of finance, is standing for President at the meeting in Houston and appears the frontrunner.

Sörling has played a leading role in the ITTF's recent governance disputes, writing a joint letter with Deputy President Khalil Al-Mohannadi in May 2020 that criticised Weikert.

Al-Mohannadi and Sörling denounced Weikert for a "lack of strategical and constructive initiatives... to safeguard the ITTF from a structural and financial point of view in these difficult times".

Since then relations have only soured and Weikert attempted to remove Al-Mohannadi from the Deputy President post in February of this year, only for the Executive Committee to reinstate the Qatari official.

insidethegames has contacted Weikert for comment on his DOSB ambitions.