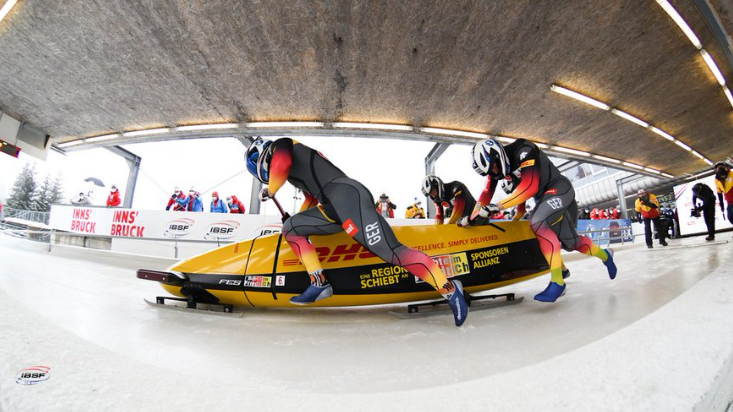 Francesco Friedrich won the final four-man bobsled World Cup race of the season at Innsbruck-Igls to complete an unbeaten record in 2020-2021, adding to the two-man title he secured on the same course yesterday.

The 30-year-old German, who won gold in the two-man and four-man bobsleigh at the 2018 Pyeongchang Winter Olympics, put together a winning total of 1min 42.08sec after he and his crew of Thorsten Margis, Candy Bauer and Alexander Schueller finished fastest in both runs.

Maier was 0.22sec behind Friedrich, with Canada’s Justin Kripps - accompanied by Ryan Sommer, Cameron Stones and Ben Coakwell - finishing third at 0.39sec back.

Those placings were replicated in the final overall four-man World Cup standings, with Friedrich securing his third consecutive overall title on 900 points.

Fourth place on the day went to Friedrich’s compatriot Johannes Lochner, who finished 0.57 behind, with Russia’s Rostislav Gaitiukevich and Latvia’s Oskars Kibermanis joint fifth at 0.62.

Friedrich, with 3585 points, was also the winner in the combined classification of the two-man and four-man bobsleigh races for the BMW IBSF World Cup 2020-2021.

Lochner, with 3221, finished second ahead of Dominik Dvorak of the Czech Republic, who netted 2368 points.

Kaillie Humphries, winner of two Olympic golds and a bronze in the two-woman bobsleigh for Canada, proved a winner again today representing the United States as she and double world indoor 60 metres hurdles champion Lolo Jones earned victory in the final World Cup race of the season at Innsbruck.

The US pairing were third fastest on the first run, but won the second to set a best time of 1min 47.07sec.

Tune in now for the final #BMWIBSF World Cup drama:

Their colleagues, Elana Meyers Taylor and Lake Kwaza, winners of the first run, had to settle for second place, 0.04sec back, ahead of Austria’s Katrin Beierl and Jennifer Onasanyu, who were 0.06 behind the winners.

But third place was enough to confirm Beierl as overall winner of this season’s two-woman World Cup event – she claimed the crystal globe with 1506 points, ahead of Germany’s Kim Kalicki, sixth today, who totalled 1431.