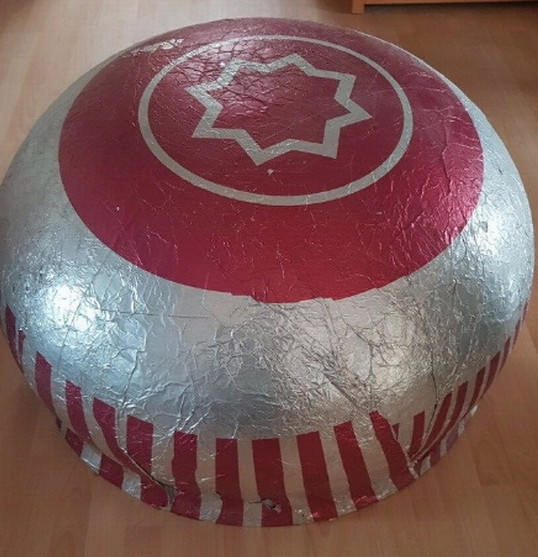 The dancing teacakes whirled around Celtic Park as Scotland hosted the Games for the first time in 28 years, helping draw attention to a sweet treat that had been popular there for more than half-a-century.

Now, it has been put up for sale on Gumtree, the online classified advertisement and community website, because the owner admitted he has "no place to store it" because it is so big.

The seller is listed as "Brian from Kilmarnock" and he is hoping that someone will give his unusual piece of memorabilia a new home.

According to Glasgow Live, the price being charged could buy around 12,000 actual teacakes.

A total of 71 nations and territories took part in the Opening Ceremony before a crowd of 40,000 that included Queen Elizabeth II at Celtic’s famous stadium.

Fergus Loudon, operations director of Tunnock's, admitted after the Opening Ceremony that he had no idea it would feature dancing teacakes, although they had given permission for the iconic image to be used.

"We knew they were going to use an image of the teacakes but because the Ceremony was a closely-guarded secret we didn't know to what extent they were being used," Loudon said.

"We were absolutely bowled over when we saw there were 30 large teacakes in the Ceremony.

"After that the phones started ringing off the hook."

It operated only as bakers and purveyors of "quality flour confectionery" until the 1950s when it created the now well-loved caramel wafers, snowballs, caramel logs and teacakes.

Following the exposure it received in the Opening Ceremony, sales of Tunnock teacakes soared with Waitrose reporting increased demand of 62 per cent within 24 hours.

A year after its appearance in the Opening Ceremony, Loudon revealed that they had sold an extra 15 million teacakes, meaning the firm's turnover had almost doubled in five years.