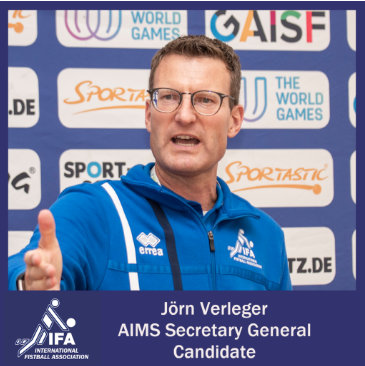 Verleger’s candidacy was endorsed by the FIA Board of Directors at their latest meeting.

The election is due to take place at the AIMS General Assembly, scheduled to be in April at the SportAccord World Sport and Business Summit in Beijing, although due to the coronavirus this may be moved.

The IFA claimed it has always contributed to the development of AIMS, with the governing body’s former president Karl Weiss having served on the AIMS Council until 2019.

Verleger succeeded Weiss as IFA President last year, having served as the organisation’s voluntary secretary general from 2015 to 2019.

The IFA say Verleger currently serves as the chief executive of Grünwalder Freizeitpark, a multi sports venue nearby Munich in Germany.

He has also worked in the administration of international sport events and sporting networks for over 20 years, including the 2011 FIFA Women’s World Cup in Dresden, as well as the 2008 FIDE Chess Olympiad Dresden and three World Table Tennis Championships.

Verleger is the current chair of the International World Games Association Anti-Doping Paenl, as well as the anti-doping-officer for World Flying Disc Federation (WFDF).

He also serves as a member of the Parasport Commissions of World Squash Federation and WFDF.

The organisation aims to strengthen each of its member sports with a view towards getting them officially recognised by the IOC.