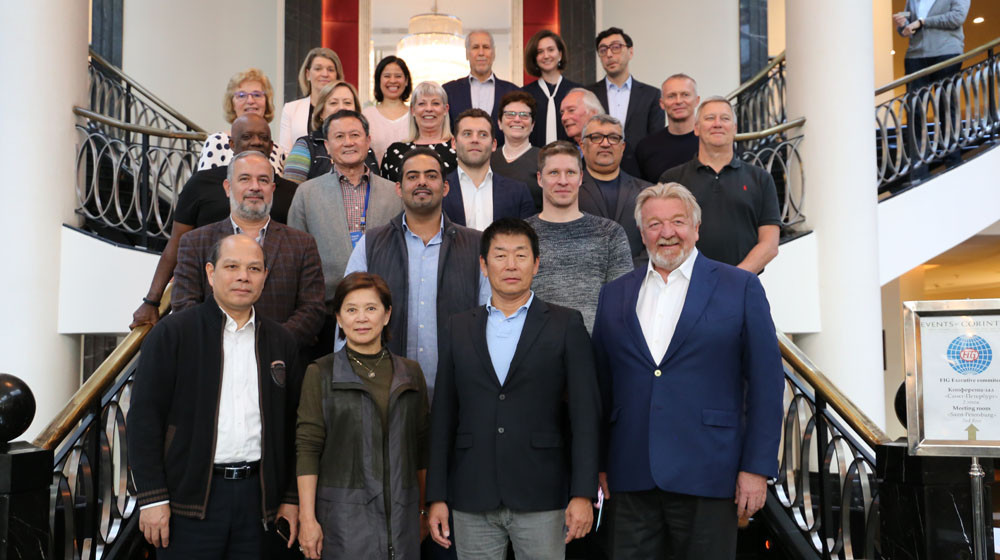 International Gymnastics Federation (FIG) plans to protect athletes and other participants from harassment and abuse have been approved by the world governing body’s Executive Committee.

It was among the main decisions taken over the course of the Executive Committee’s two-day meeting in Saint Petersburg in Russia.

The framework supplements the policy and procedures for safeguarding and protecting participants, the FIG claims.

Its purpose is to help draft a specific plan for an event to minimise the likelihood of incidents of harassment and abuse.

Approval of the framework comes around two months after FIG Athletes' Commission chairperson Liubov Charkashyna sparked controversy by suggesting some athletes had claimed they had been sexually abused for financial gain.

The FIG Executive Committee member appeared to reference the scandal in the United States, where former USA Gymnastics doctor Larry Nassar was found to have sexually abused hundreds of athletes under the guise of medical treatment.

In an interview with Belarusian publication Nasha Nina, the London 2012 Olympic bronze medallist in the rhythmic all-around competition cast doubt on some of the victims and expressed scepticism about the amount of cases in sport.

Charkashyna's comments come despite the FIG Athletes' Commission pledging support for the Ethics Foundation, set up in the wake of the Nassar scandal, at a meeting between the two bodies earlier this year.

In a statement, the FIG said the meeting had focused on how the athletes' body could "become a key partner" of the Foundation and "help this body fulfil its mission of safeguarding the sport’s practitioners from harassment and abuse".

Hundreds of survivors of Nassar, sentenced to 175 years in jail in January 2018 after being found guilty of sexually abusing dozens of American gymnasts, including Olympic and world champions, have filed lawsuits against the organisations and individuals who enabled his abuse.

These include USA Gymnastics, which has failed to adequately respond to the crisis stemming from the Nassar scandal, it is claimed.

Among the other decisions taken at the FIG Executive Committee meeting was the awarding of the 2020 Aerobic Gymnastics World Championships to Azerbaijan’s capital Baku.

The event is due to take place from May 14 to 16 and will follow the World Age Group Competitions, scheduled to be held from May 8 to 10.

The Executive Committee has also awarded the 2021 World Gym for Life Challenge to Portugal’s capital Lisbon with the fourth edition of the event set to run from July 13 to 17.

In terms of the Tokyo 2020 Olympic Games, it has been decided that athletes who have qualified as individual gymnasts from a national federation which has also qualified a team will have to wear a singlet or leotard of a distinctively different colour from that of their side during the qualification competition in Japan’s capital.

It is hoped this will help spectators and organisers to distinguish between those gymnasts who are on the team and those who are competing as individuals.

The Executive Committee has also approved the various criteria for judges' selection for Tokyo 2020 in rhythmic and trampoline gymnastics competitions.

Additionally, the Executive Committee was informed of the progress made with the judging support system that has been developed by Japanese company Fujitsu in partnership with the FIG.

The judging support system in the German city is expected to offer a 3D multi-angle view for all exercises on five apparatus – three in men’s and two in women’s artistic gymnastics – and is to be used in case of inquiries or blocked scores in conjunction with the current instant replay and control system.

This is subject to the approval of the Executive Committee, which is due to hold its next meeting in Nicaragua's capital Managua in August.

Another decision taken by the Executive Committee was to propose to the FIG Council the granting of provisional membership affiliation to the Guam Gymnastics Federation (GGF).

The definitive affiliation of the GGF will be submitted to the 2020 FIG Congress in Antalya in Turkey.