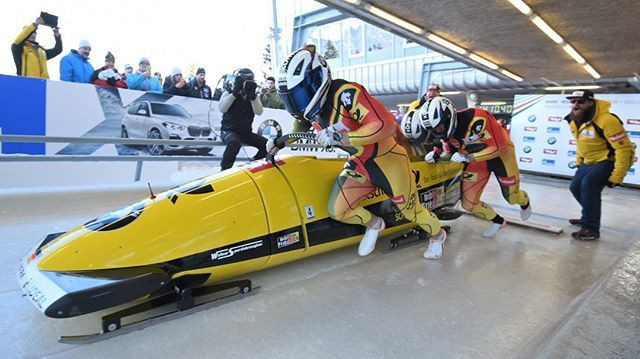 Germany's Francesco Friedrich set a track record in the four-man bobsleigh event on his way to another victory at the International Bobsleigh and Skeleton Federation (IBSF) World Cup in Innsbruck.

Friedrich celebrated a year unbeaten in the two-man bobsleigh event yesterday and he added four-man success with a typically dominant display in the Austrian city today.

The world champion and his crew of Martin Grothkopp, Alexander Schüller and Thorsten Margis set a record of 50.42secs in their first run on the Olympic Sliding Track.

The German team secured victory in an overall 1:41.17 having clocked a time of 50.75 in their second run.

The Latvian team of Oskars Kibermanis, Matiss Miknis, Arvis Vilkaste and Janis Strenga were in second place with a time of 1:41.36.

Dominik Dvorak of the Czech Republic and his crew of Dominik Suchy, Jan Sindelar and Jakub Nosek earned their best World Cup result, finishing fifth in 1:41.85.

Friedrich's third victory of the season saw him extend his overall lead in the World Cup standings with 1,085 points.

The next World Cup event is scheduled to take place in St Moritz from Friday (January 25) to Sunday (January 27).