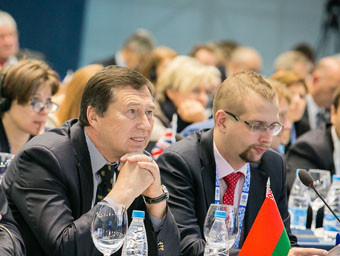 George Katulin, chief executive of the 2019 European Games in Minsk, has been re-appointed secretary general of the National Olympic Committee of the Republic of Belarus (NOC Belarus).

The 62-year-old, who takes over from Anatol Kotau, has a high level of experience in sports and administration in various fields.

He had a previous 10-year spell as NOC Belarus secretary general between 2005 and 2015.

Katulin was appointed Minsk 2019 chief executive earlier this year and is heading up a team that features several experienced sports leaders, including Kotau as his deputy.

He is also an important contributor to the European Olympic Committees (EOC) as chair of the Olympic Games Commission and has represented the NOC Belarus in various capacities for many years.

Last month, a series of technical meetings were held between officials in Belarus and international experts to discuss preparations for Minsk 2019.

They were the prelude to the first official visit of the EOC Coordination Commission, chaired by Greece's Spyros Capralos, to the Belarus capital to inspect preparations for the second edition of the Games.

The meeting with the key Minsk 2019 stakeholders was held at the NOC Belarus headquarters, where EOC acting President Janez Kocijančič had previously signed the Host City contract.

The EOC’s technical experts discussed a wide range of areas critical to the success of the European Games, including the sports programme, IT requirements, marketing, broadcasting and accommodation.

Kocijančič and EOC secretary general Raffaele Pagnozzi travelled to Minsk for the meetings and were present when the Coordination Commission met with Katulin, NOC RB first vice-president Andrei Astashevich, Belarus Minister of Sports and Tourism Aleksandr Shamko and several other key stakeholders.