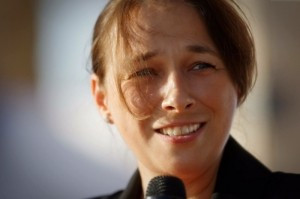 World Underwater Federation (CMAS) President Anna Arzhanova has hailed the importance of 2016 for the organisation and the whole underwater movement in her New Year’s message.

The Russian, beaten by Switzerland’s Patrick Baumann in the race to become President of SportAccord in April, said last year ""concludes successfully" the work started during CMAS' 2013 General Assembly in Cebu in the Philippines.

"The targets fixed at that time have been achieved entirely and the seeds for further development and improvement have been launched," Arzhanova said.

"Indeed, during the past four years we have increased the financial capability of CMAS taking it to a satisfactory stability and growing margins of profitability, which now allow CMAS to further invest in its development also by sustaining initiatives which widen and strengthen our visibility worldwide.

"We have approved the new statutes and related rules of procedure which have modernised the governance of CMAS in terms of transparency, democracy and consistency with the International Olympic Committee (IOC) requirements for recognised sport federations, receiving an important endorsement by the IOC, shared by all those who attended and voted at its General Assembly in Rome.

"We have strengthened and improved the relations with all our stakeholders, such as the UNESCO, the IOC, SportAccord, the ARISF (Association of IOC Recognised International Sport Federations) and the World Games reaching outstanding levels of credibility and active presence and cooperation at top levels in ARISF and the IWGA (International World Games Association), where CMAS is represented in the relevant Boards.

"The exceptional results achieved by all our sports disciplines thanks to the restless efforts of all national member federations, of the athletes, coaches, trainers, officials and volunteers allow CMAS to speak its voice at the Olympic Movement level and to be listened to."

Arzhanova confirmed that the first CMAS international training centre for apnoea and diving is about to be completed in Turkey and will soon be ready to welcome athletes and amateurs from all over the world.

She said 2016 has seen outstanding results achieved in apnoea, a sports event where an athlete holds his or her breath, keeping the face below the surface of the water, having also implemented full safety standards and on-line broadcasting of competitions.

Arzhanova also pointed to finswimming as another growing discipline, particularly with student competitions under the aegis of the International University Sports Federation and the participation in such events as the World Games, the European Games, the Mediterranean Beach Games and the Bolivarian Beach Games.

She claimed this gives finswimming the visibility it deserves and also puts it on the "only right path towards its inclusion in the Olympic programme".

Last year also saw the launch of several important initiatives such as the Blue Helmets of the Sea, a new task force that will seek to uncover underwater archaeological treasures and protect marine environments, in cooperation with the UNESCO and the European Union (EU) Commission for Sports and Culture.

Arzhanova promised this will continue in 2017 with parallel programmes for the formation of migrants in underwater archaeology and marine preservation promoted together with Silvia Costa, President of the EU Commission for Sports and Culture.

"All that has been done so far is not the outcome of just one player, but it is indeed a team work result and I would like to take this opportunity to truly thank all the CMAS Board members, the Presidents of our national member federations and secretary generals, officials, CMAS staff, athletes, coaches, advisors and you all for your strenuous commitment and encouragement," added Arzhanova.

"I am pretty sure that all together we can accomplish the missions and face the challenges we have ahead of us for the next future.

"All together, we can make it happen.

"My most sincere wishes of a bright and prosperous 2017."