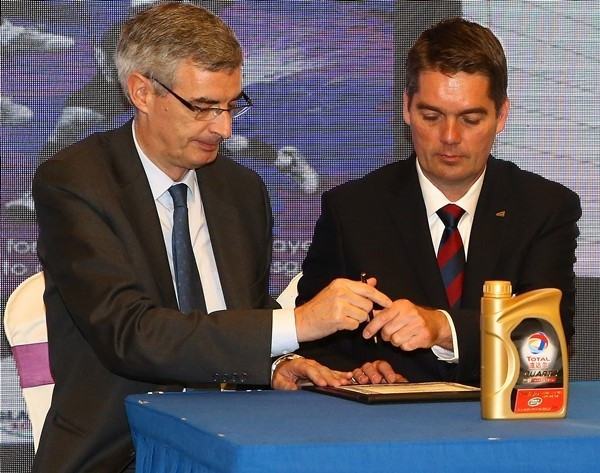 The Badminton World Federation (BWF) has offically signed the deal that will see Total become the title sponsor of three of its major events, including the World Championships.

The energy giant will also title sponsor the Thomas & Uber Cup Finals and the BWF Sudirman Cup as part of the agreement, which was penned by Total and BWF officials during a ceremony held in the Chinese city of Dongguan.

The first tournament under the four-year partnership, announced in January, will be this year’s World Championships in Indonesia’s capital Jakarta in August.

Also at the signing ceremony were representatives from Kunshan in China, Australia’s Gold Coast and Glasgow in Scotland to mark their hosting of the 2016 Thomas & Uber Cup Finals, the 2017 Sudirman Cup and the 2017 World Championships respectively.

“Today is indeed a special occasion where we can unite and present various branches of our Major Events family who have a unique connection,” said BWF President Poul-Erik Høyer.

“It is my pleasure, on behalf of BWF, to welcome you - our hosts - as members of this new and fast-growing family bound together by BWF and Total.

“BWF is excited about the journey ahead with Total as our major events title sponsor, supporting some of badminton’s most prestigious tournaments, showcasing our elite players and some of the best action in our sport - and helping us take badminton further and higher.

“Blend with that, host cities from three different BWF confederations that are eager and clearly competent to stage these sporting spectacles - and it’s win-win all around.

“As the owner of these events, BWF could not have asked for a better partnership and we look forward to working with Total and all of our hosts for the betterment of badminton.”

Total’s marketing and services Asia Pacific specialties vice-president Stéphane Lagrue said the firm is pleased to be the first global energy company to partner with BWF.

“On behalf of my colleagues in China and the rest in Asia Pacific, we are very proud to be partnering with the BWF and badminton at the elite level; a sport which shares our core values - athletic endurance and high performance - and possesses similar positive energy,” he explained.

“Around 80 per cent of Olympic badminton medallists are from Asia Pacific, a region where Total is committed to growing our presence through this highly visible and accessible sport.”

Bertrand de La Noue, general representative of Total in China and chairman of Total (China) Investment, added: “The BWF major events epitomises the pinnacle of international badminton, with strong public interest particularly from China, whose national players rank amongst the top in the world.