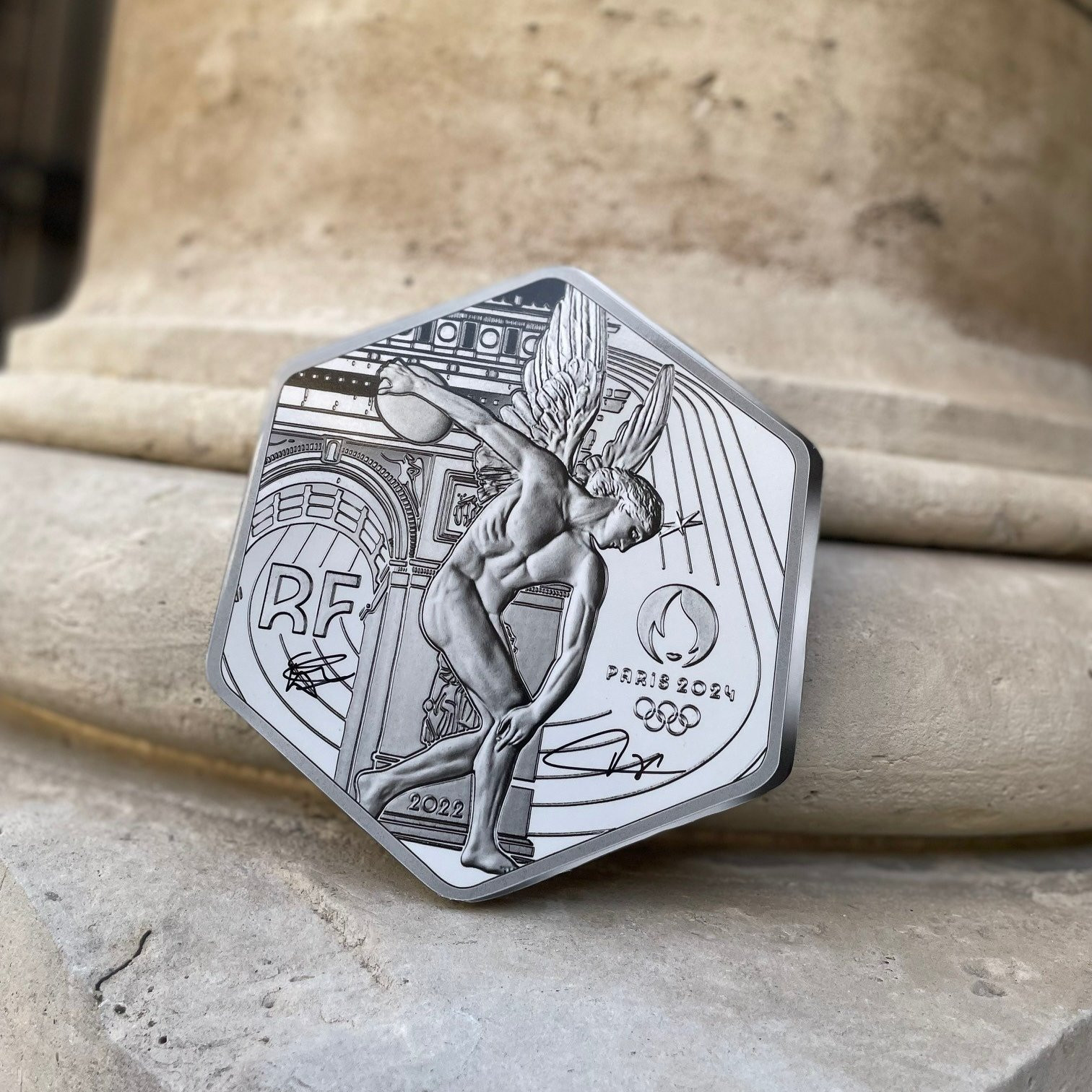 Paris 2024 chief executive Étienne Thobois has welcomed the minting of a special €10 (£8.74/$9.83) hexagonal silver commemorative coin as a symbol of French "know how".

A special ceremony to strike the coin was held at the Monnaie de Paris, the mint which has produced French currency since the ninth century.

"This new collection reflects our desire to create bridges between the arts and sports by putting athletes, the main players in the Games, at the heart of our projects," Thobois said.

The design features a classic discus thrower in front of the Arc de Triomphe with an athletics track in the background.

The reverse of the coin features the national motto Liberté, égalité, fraternité.

The striking of the coin was witnessed by French Sports Minister Amélie Oudéa Castéra.

"Hosting this event is a magnificent symbol of the pride of France, integrating sport history and artistic creativity," Oudéa Castéra wrote on social media.

"We wanted to portray in metal, all the atmosphere of competition and show the talented athletes surpassing themselves and expressing the pride of the nation in hosting this event," Monnaie de Paris chief engraver Joaquin Jimenez explained.

"I wanted a very clean rendering with sharp edges and the technical teams worked very hard to produce exceptional coins honouring sport and its values all in a fusion with the world of numismatics."

"It is with immense pride that the Monnaie de Paris offers these objects of precious metal honouring sportsmen and sportswomen and the heritage of our country," Monnaie de Paris director general Marc Schwartz said.

The mint has also produced further coins in its heritage collection to depict "the most emblematic places in Paris."

Similar pieces have representations of the basilica of Sacre Coeur at Montmartre and the Opera Garnier.

There are also further coins issued as part of the sports collection, featuring track cycling, kite foiling and jumping to represent equestrian sport.

The Paralympic sport of blind football, known as le cécifoot in French, is also included.

Each coin has a depiction of the Eiffel Tower on the reverse.

This is the second issue of commemorative coins produced to support Paris 2024.

Coins depicting the Olympics of antiquity were excavated at Olympia and other archaeological sites, but in the modern era, coinage have played an important role in promotion and Olympic merchandising since the Helsinki Games 70 years ago, when two coins were struck.

For Munich 1972, the coin programme was expanded to six designs, although all were the same denomination.

Athens 2004 was the first to issue an Olympic commemorative in the new Euro currency.

For London 2012, the Royal mint issued 29 different 50 pence coins to represent all the sports on the Olympic and Paralympic programmes.

Although few remain in circulation, the football commemorative is thought to be the rarest.