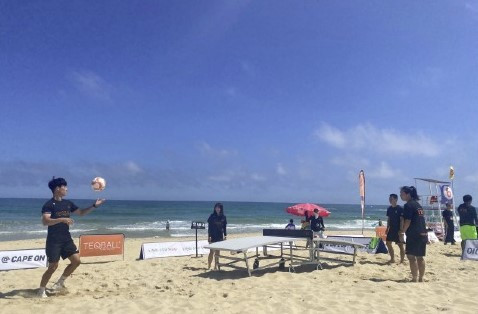 The International Teqball Federation (FITEQ) is exploring the possibility of organising a teqball tournament involving North Koreans and South Koreans after it staged a beach event in Gangneung city.

Athletes from 19 South Korean teams participated in the competition on Jumunjin Beach with the FITEQ hailing it as a "success."

The worldwide governing body announced its ambitious plan to hold another event, but with North Korea’s involvement as it looks to show sport's ability to unite people together.

It is seeking to work with the relevant organisations to stage such a tournament.

North and South Korea have been formally divided at the Military Demarcation Line since 1953 when an armistice was agreed following the three-year Korean War.

This resulted in thousands of families being split apart.

Hope of reunification has come and gone on several occasions with the latest set of tensions arising from North Korea’s nuclear programme and testing.

A brief moment of unity through sport was shown at the Pyeongchang 2018 Winter Olympics when athletes competed under the unified title "Korea" and the delegations marched under the Korean unification flag at the Opening Ceremony.

However, this unified spirit had seemingly come to an end by the conclusion of the Closing Ceremony with Koreans waving their own national flags and wearing different uniforms.

Only some could be seen still carrying the unified flag.

Korean Teqball Association President Yoo Song-geun said in 2020 that he held hope a unified teqball team with North Korea would come to fruition.

Asia is scheduled to hold teqball events in the future, with the sport a medal competition at the Sanya 2023 Asian Beach Games and a demonstration event at the Asian Indoor and Martial Arts Games.