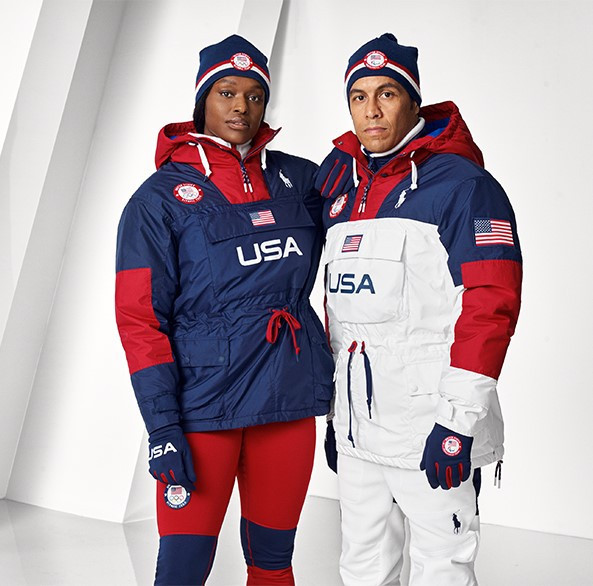 The uniforms worn by the American team at the Beijing 2022 Olympic Opening Ceremony will be made of materials which react to the athletes' body temperature to maintain comfort levels without any electronics.

They have been designed by Ralph Lauren and include fabric pioneered by Skyscrape, a Portland textile firm.

Made from two materials which contract and expand at different rates when temperatures change, they can turn the garment into a puffer jacket when it is colder and can revert to a lighter jacket at other times.

Ralph Lauren's son David, branding and innovation officer for the company, had been looking for a way to upgrade the uniforms used at Pyeongchang 2018, which were embedded with battery packs to regulate temperature.

"Athletes are going from cold to hot to cold environments," Lauren said.

"In the past, there's been a lot of discussion about layering systems, but when you talk to athletes, they make it clear they don't want lots of inconvenient layers."

The technology behind the garments is known as "Intelligent Insulation" and was developed with a grant from the United States Department of Energy.

"It was one of the most forward-thinking technologies we'd seen," Lauren insisted.

The uniform has been manufactured from recycled polyester to enable it to be more sustainable.

The design process took place during the pandemic so technicians used computers to demonstrate how the garments would look.

"We created a computer rendering that allowed us to see what 300 athletes would look like in these outfits walking through the Opening Ceremony with flash bulbs going off, so you could see the light shine off the jacket," Lauren said.

"When the Olympic Committee wanted to see a garment in a different colour, we could change it in real time for them."

Fashion magazine Vogue gave its verdict on the new uniform.

"The sporty line was infused with technical innovation as the label debuted its latest designs which proudly embrace all things red, white and blue."

The women will wear mainly blue with red appearing on the hood, sleeves and leggings.

Aja Evans, a Sochi 2014 bobsleigh bronze medallist who is travelling to Beijing as a reserve, was amongst the athletes chosen to model the new kit.

"This is my favourite look, it feels good and can go from indoor to outdoor," Evans said.

The men will be mainly in white with dark blue across the shoulders and red flashes on the sleeves.

Both uniforms feature knitted beanie hats and gloves in navy blue and a pouch bag.

"There was something about putting them on, and instantly feeling a part of something bigger."

Ralph Lauren has been the American team uniform designer since Beijing staged the Summer Olympics in 2008.