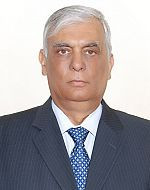 A spokesperson for the IOC confirmed it had sent the Pakistan Olympic Association (POA) a letter calling for a solution to be reached in response to the row.

It has been triggered by the Pakistan Sports Board (PSB), the Government's regulatory body for sport in the country, demanding the resignation of longstanding POA President Syed Arif Hasan.

The PSB allege the POA failed to control Pakistan's athletes when they were in Tokyo for the Games and claimed the organisation did not properly ensure its delegation adhered to the strict COVID-19 rules in place at the event.

It also claims there were accredited POA officials who were on "joyrides" at Tokyo 2020 and were not the correct people for the roles they had been assigned.

"All of this showed the failure of the Olympic Committee," the PSB said.

The POA, which has frequently clashed with the Pakistan Government in recent years, dismissed the accusations.

Forcing Hasan - POA President since 2004 - to resign would go against the Olympic Charter, which prohibits Government interference in NOCs.

"We can confirm that the IOC has sent a letter to the NOC of Pakistan to reiterate very clearly the IOC's position on the autonomy of the Olympic Movement, in accordance with the Olympic Charter, and has called upon all parties (i.e. the Government authorities, the NOC and the National Sports Federations) to meet and discuss in order to resolve the ongoing issues smoothly, in line with the principles and rules which govern the Olympic Movement," the IOC said.

Pakistan could be suspended by the IOC if the dispute is not resolved.

Should the IOC move to suspend Pakistan, its athletes at the Beijing 2022 Winter Olympics could be forced to compete as neutrals under the Olympic Flag.

It is not the first time the POA has been in the IOC's crosshairs over Government interference.

In 2013, two rival factions claimed to be the legitimate body in charge of the POA, leading the IOC to hold talks with the Pakistan Government.

The Olympic Committee of the Democratic People’s Republic of Korea was suspended earlier this month after it refused to send athletes to Tokyo 2020, while the Belarus NOC has also been sanctioned after its leadership was found to have discriminated against athletes in the nation.