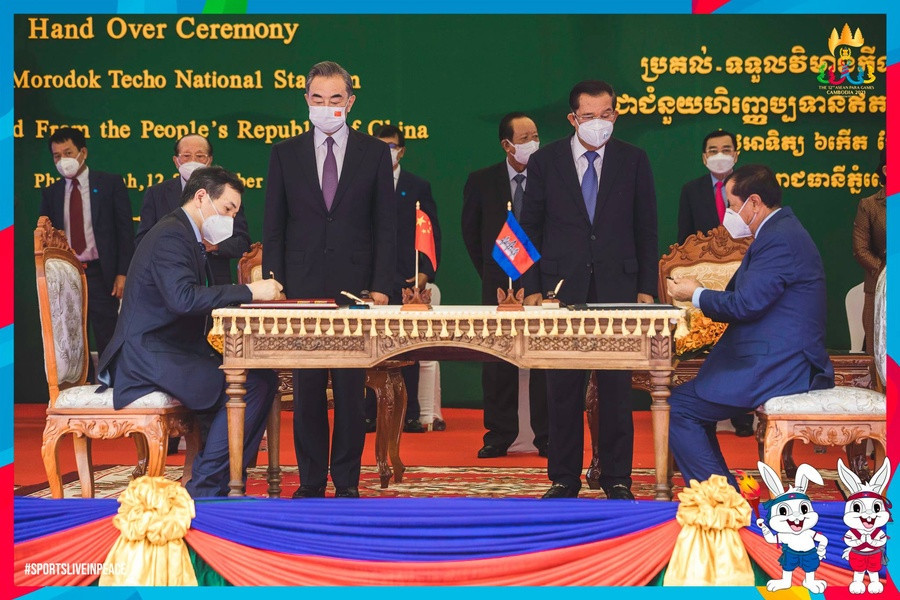 The President of the National Olympic Committee (NOC) of Cambodia, Dr Thong Khon, and the organisation’s secretary general Vath Chamroeun were special guests at a handover ceremony of the main stadium for the 2023 South East Asian (SEA) Games.

The newly-built Morodok Techo National Stadium in Phnom Penh is set to act as the main sports hub for the 2023 SEA Games, scheduled to take place in Cambodia from May 5 to 16 2023.

Khon described the stadium, which is 39.9 metres tall and built in the shape of a sailing ship, as "a great achievement in Cambodia’s sports sector" and a "new symbol of the friendship between Cambodia and China", as reported by Xinhua.

"The sailing ship symbolises a long-standing traditional friendship between Cambodia and China because Chinese people used to travel by sailing ships to Cambodia in ancient times," said Khon.

"The China State Construction Engineering Corp was very responsible and it used high-end technology for the construction of the stadium in full compliance with all technical standards.

"The stadium has a seating capacity of 60,000 with a design that will allow a full evacuation in seven minutes in case of emergency."

It also houses a hotel, sportswear and sports equipment shops, food courts and other facilities.

Khon added: "It will not only support the development of the sports sector but also serve as a magnet to attract tourists, especially Chinese guests, to Cambodia in the post-COVID-19 pandemic era."

Pen Sekong, who competed for Cambodia in the men’s 100 metres at the Tokyo 2020 Olympics, said of the stadium: "It's a symbol of pride for Cambodia because in our history we have never had such a great stadium."