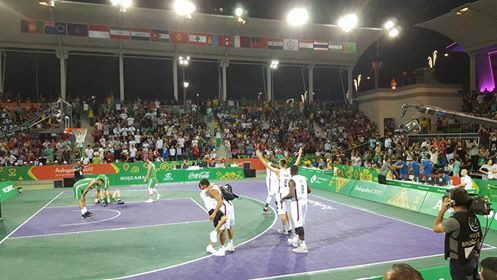 Qatar claimed a comfortable victory over Iraq here this evening to claim the men's 3x3 basketball title at the 2017 Asian Indoor and Martial Arts Games.

The Qataris, who advanced to the final with a perfect 4-0 record, cruised to a 22-12 win with more three minutes to spare in the game.

Having established an early 2-0 lead, they never looked back, with Iraq only managing to draw level once at 5-5.

Qatar has a history of success in the sport.

In 2014, they were crowned the FIBA 3x3 World Championship winners in Russia's capital Moscow after beating defending champions Serbia in the final.

Erfan Ali Saeed was the only player from that team playing at Ashgabat 2017 and captained his country to the gold medal.

He topped the Qataris' charts with 11 points, scoring four out of four from two-point range.

"Luckily we made all of our shots and we won the medal," Saeed said.

"I’m really happy, it’s always a good thing to get the gold and take it home for the federation and the people of Qatar."

The semi-finals took place earlier in the day with Qatar edging Mongolia 15-14 and Iraq triumphing 20-18 at the expense of Kyrgyzstan.

In the women’s final, Thailand defeated Uzbekistan 2-0 in overtime following a 20-20 draw in regulation.

It ensured a repeat of their success from 2009, the only other time women's 3x3 basketball has appeared at the Games.

Uzbekistan had led for much of the match and appeared to be on course for victory when leading 20-19 with just moments remaining.

But Thailand managed to draw level to take the match through to the additional period and then went on to triumph with a two-point shot from Thidaporn Maihom.

"We all played a role in winning this gold medal," Maihom's team-mate Naruemol Banmoo said.

"Now we’re looking to qualify for the Olympic Games and we hope to go to Tokyo [in 2020]."

Hosts Turkmenistan claimed the women’s bronze medal with a 15-12 win over Syria.

The Olympic Council of Asia has been an avid supporter of the 3x3 basketball for more than a decade, featuring the sport as a demonstration event at the 2007 Asian Indoor and Martial Arts Games in Macau.

At the following year's Asian Beach Games on Indonesian island Bali, it was included as a medal sport.

The sport has since grown rapidly and will be included in the Olympic Games programme for the first time at Tokyo 2020.